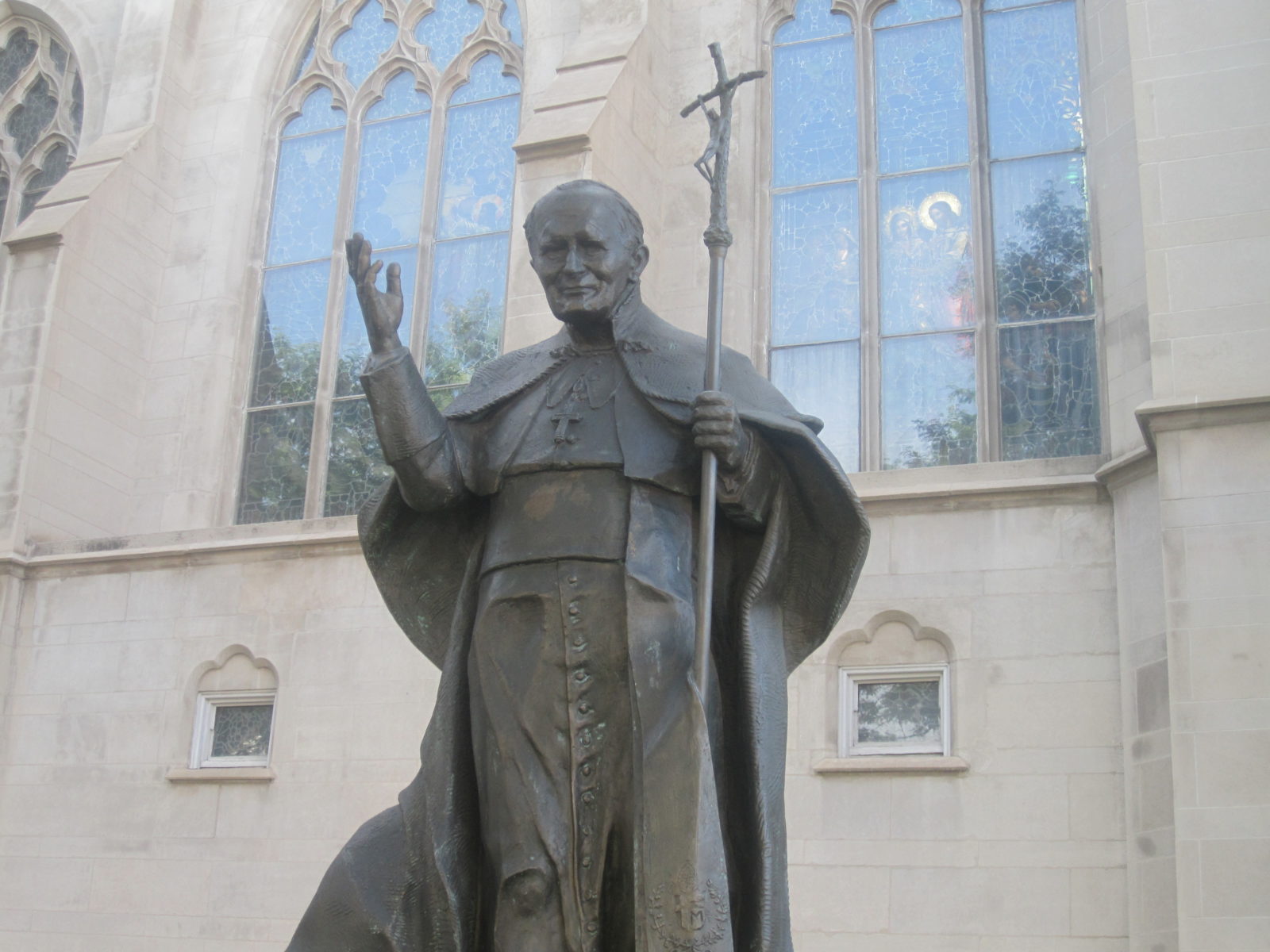 For almost three decades the Catholic left has turned intellectual somersaults arguing that John Paul II didn’t write, and indeed couldn’t have written, what the rest of the literate world recognizes as a guarded endorsement of regulated markets in the 1991 encyclical, Centesimus Annus. The further charge from the fever swamps is that I, along with several friends and colleagues, willfully distorted the pope’s teaching in an effort to spin him into some sort of papal libertarian or neo-liberal. Alas, for those who continue to chew this cud, their argument implies that the man whose teaching they claim to be defending was a fool who didn’t know who his friends were or what they were doing.

A little chronology (available in much greater detail in my memoir, Lessons in Hope: My Unexpected Life with St. John Paul II) should set the record straight for those capable of learning from it.

Centesimus Annus appeared in May 1991. John Paul read my commentaries on the encyclical in both the secular and Catholic press, and during our subsequent meetings, over meals at Castel Gandolfo or in the Apostolic Palace, offered not a word of concern or correction about my analysis. Indeed, on more than one occasion he thanked me and others of my friends for having made Centesimus Annus so well known throughout the Anglosphere.

A year later, with John Paul’s encouragement, colleagues and I began an annual seminar on Catholic social doctrine for graduate students from North America and Europe; that seminar will meet for the twenty-eighth time in July. Centesimus Annus has been the seminar’s intellectual framework from its inception, a fact of which the pope was quite aware, as he often sent notes of greeting to the faculty and students. In 1994, the seminar (and its faculty’s interpretation of Centesimus Annus) moved from Liechtenstein to the pope’s “beloved Kraków” at John Paul II’s urging; and there we have remained ever since.

In May 1995, I proposed writing the pope’s biography and the history of his pontificate. Over dinner in early December that year, John Paul agreed to cooperate with the project. In a subsequent letter, he accepted my offer “with wholehearted thanks,” writing that I was “in a very good position” to do the job as, among other things, I had studied “assiduously the more important encyclicals.” This is the response of a man who thought I was spinning him for partisan purposes?

The English language edition of Witness to Hope: The Biography of John Paul II, which included an amplified version of the analysis of Centesimus Annus I had written in 1991, was published in September 1999, and the Polish edition appeared in May 2000. In late 2000, John Paul told me that he had read the book twice, “once in English and once in Polish.” A year later, he said he was reading the Polish edition, Świadek nadziei, yet again. When I asked him why he was reading the book a third time, as he surely knew the story better than I did, he replied that I helped him think back on things that he might not otherwise have a chance to reflect upon. Again, there wasn’t the slightest suggestion that I had misinterpreted his thought, in Centesimus Annus or in my analysis of any facet of his magisterium.

In sum: Over a period of some fourteen years and numerous conversations, John Paul II, who was keenly aware of how he was interpreted (and misinterpreted) around the world, never once suggested that I or any other of my colleagues and friends were misrepresenting his thought.

For the past twenty years, a recurring subplot in this melodrama has revolved around a set of lecture notes, Catholic Social Ethics, which are relics of the future pope’s teaching in Kraków in the mid-1950s. In his 1998 biography of John Paul II, Man of the Century, the late Jonathan Kwitny made a considerable fuss over these notes, suggesting that they evinced a sympathy for Marxist critiques of capitalism. As I knew that Kwitny was not overly familiar with mid-twentieth-century Catholic social doctrine and the critiques of Manchesterian liberalism common to both Pope Leo XIII and Pope Pius XI, I decided to look into the matter during the preparation of Witness to Hope. So I asked John Paul II whether Catholic Social Ethics was his, and in the pope’s name one of his closest aides, then-Bishop (now Cardinal) Stanisław Ryłko, tried to clarify things in a conversation we had in November 1997.

In 1953, Rylko told me, Father Karol Wojtyła was assigned to teach the social ethics course at the Kraków seminary, which had previously been taught by a specialist in the field, Father Jan Piwowarczyk. Wojtyła adopted Piwowarczyk’s course notes, amplifying and emending them as he thought appropriate; he saw no need to rewrite material prepared by one of Poland’s leading authorities on the Church’s social doctrine, but added observations and analyses, drawn from his own experience and reading. As Ryłko put it to me, Wojtyła “elaborated” Piwowarczyk’s text, “but it was not,” in the main, “his matter.” I reported all of this in Witness to Hope—and perhaps foolishly imagined that that settled things.

The Catholic University of Lublin [KUL] has now published a scholarly, annotated edition of Catholic Social Ethics. When the book was presented in Lublin recently, Dr. Agnieszka Lekka-Kowalik, director of the sponsoring John Paul II Institute, described the work as “a didactic script” for lectures, “not an academic monograph.” The editors had worked hard to identify and highlight the Wojtyła additions to Piwowarczyk’s text, and these emendations are doubtless of scholarly interest. They also represent what the late Father Tadeusz Styczeń, John Paul II’s closest intellectual disciple, regarded as Wojtyła’s early and rather undeveloped thought on various questions of social ethics, however interesting this or that Wojtyłan observation might be. Students of Wojtyła will be grateful for the editorial work that the KUL scholars have done. But anyone who imagines that this text represents the settled, mature thinking of John Paul II on Marxism, capitalism, and economics must also imagine that his thought got frozen in amber in the mid-1950s. And that is another insult to the memory of the most intellectually consequential pope in centuries.

The publication of the Lublin edition of Catholic Social Ethics quickly became the occasion for yet another round of Wojtyła fantasies from the Catholic left: In this case, from journalist Jonathan Luxmoore, who announced on the BBC and in a cover story in The Tablet that the Lublin edition would require a “revision of the standard biographies” and is a “serious rebuff to those who sought to portray him as a life-long true believer in liberal capitalism.” One has to wonder just who Mr. Luxmoore has in mind here, as no one of whom I’m aware ever suggested that Father Karol Wojtyła was a “true believer in liberal capitalism” in the 1950s; how could he be, as he had had no experience of capitalism in any form at that point in his life, nor had he made economic analysis a focal point of his intellectual work? As for a revision of the standard biographies, Mr. Luxmoore is certainly welcome to have a go. But I would suggest that he is going to have some difficulty in any such endeavor in squaring his conspiracy-driven fantasy about my presentation of John Paul II’s  thought with the facts noted above.

Unless, of course, Mr. Luxmoore is prepared to argue that the pope who encouraged me to write his biography, who told me that he had read Witness to Hope three times, and who never offered a word of suggestion about revising anything, couldn’t read either Polish or English—and had been hoodwinked to boot.

This nonsensical argument is a distraction from what is really interesting and important about the social-ethical thought of Karol Wojtyła/John Paul II: its constant development over the decades, which took place on the basis of certain stable and settled convictions. Thus while Karol Wojtyła was a close student of Marxist theory for decades (and carried a journal of Marxist thought into the Sistine Chapel during the conclave that elected him pope), the Wojtyła of the 1950s certainly believed what the John Paul II of 1991 wrote in Centesimus Annus, that Marxism’s fundamental flaw lay in its concept of the human person and the “spiritual void” communism created by trying to “uproot the need for God from the human heart.”  Moreover, Wojtyła the engaged pastor understood the difference between those Europeans and Latin Americans for whom Marxism was a “fascinating abstraction” and those for whom communism was “an everyday reality” (as he put it during a 1974 Synod of Bishops).

But it is also true that, amid those consistencies of perspective and analysis, the pope’s social doctrine evolved during his pontificate. Laborem Exercens, in 1981, employed a phenomenological analysis of work to enrich the Church’s theological and spiritual understanding of labor. In 1987, the pope wrote of a “right of economic initiative” in the encyclical Sollicitudo Rei Socialis, signaling a new recognition on his part that entrepreneurship is an expression of human creativity. In Centesimus Annus, he taught the post-Cold War world that, contrary to democratic functionalists and economic libertarians alike, democracy and the free economy are not machines that can run by themselves. Political and economic freedom set loose tremendous human energies. And if those energies are to result in personal flourishing and social solidarity, not libertinism and chaos, they must be tempered and directed by a vibrant public moral culture—as well as by law and regulation.

That “culture first” approach to politics and economics—which has always been at the center of my analyses of Centesimus Annus—has been thoroughly vindicated in the decades since the encyclical was first published. Political appeals to base motives and economic appeals to crass acquisitiveness have done serious harm to the freedom project in the West. In that sense, John Paul II’s mature social-ethical thought is more important than ever for serious thinkers and leaders to engage, in a conversation crucial to the future of the West, and indeed the entire world.

Conspiracy theories about non-existent networks of influence determined to distort the teaching of John Paul II and advance a “neo-liberal” agenda (whatever that is) are an obstacle, not a contribution, to that conversation.

This article was originally published on First Things
https://www.firstthings.com/web-exclusives/2019/02/wojtyan-fantasies-revisited

Martyrdom and the Christian Future in Iraq