Six years after 9/11, there are certain things we can’t not know. We may wish these things weren’t true. We can try to ignore them. But safe passage through a moment in history fraught with both danger and possibility requires us to see things as they are.

What can’t we not know?

We can’t not know the name of the enemy: the name is jihadism, that form of Islamic extremism which teaches that it is the duty of every Muslim to use any means available to advance the prospects of a world that acknowledges the sovereignty of Allah and lives under shari’a law. That jihadists are a small minority of the world’s 1.2 billion Muslims is both true and irrelevant. What counts is cultural morale, and the morale of jihadists is may be higher today than it was six years ago.

We can’t not know that jihadists read history through the prism of their theological convictions. The West, tutored by a progressive view of history, read the Soviet defeat in Afghanistan as a victory for freedom. Jihadists read it as a victory for jihadism, a Phase One triumph in an ongoing war against the infidels. Phase Two, which jihadists imagined might be easier than Phase One, had the United States as its target. Attacks on American embassies in East Africa in the mid-1990s were intended to trigger a struggle in which the United States would be defeated as the Soviet Union was defeated in Phase One. When that didn’t work, jihadists blew a hole in the side of the U.S.S. Cole as it was refueling in the harbor at Aden. When that didn’t elicit the expected response, Osama bin Laden concluded that an outrage impossible for the Americans to ignore was required. Thus 9/11.

Bin Laden got one thing wrong, and we can’t not know that, either: he hadn’t reckoned on the robust response of those allegedly decadent Americans, first in Afghanistan, later in Iraq. As the dean of western scholars of Islam, Bernard Lewis, has written, “it is noteworthy that there has been no successful attack on American soil since…the U.S. actions in Afghanistan and in Iraq indicated that there had been a major change in the U.S…” But now, closely watching our politics and monitoring our national morale, jihadists like bin Laden may, Lewis suggests, be returning to their original assessment of American fecklessness — and may conclude “that they need only to press a little harder to achieve final victory.” A determination to make clear that this re-assessment is wrong ought to be the threshold test of seriousness applied to any presidential or congressional candidate in 2008. For, as Lewis concludes, if the jihadists’ reassessment is proven right, “the consequences — both for Islam and for America — will be deep, wide, and lasting.”

Another thing we can’t not know is that the war against jihadism is for the long haul: it won’t be resolved in the next administration, or in the next three administrations. Staying power — rooted in the conviction that religious freedom, tolerance and civility, the rule of law, and the method of persuasion in politics reflect universal moral truths — is essential to victory.

Moreover, we can’t not know that this long-term war against jihadism has to be fought on multiple fronts, many of them non-military. Interreligious dialogue is one such front. It ought to focus (as Benedict XVI suggested last December) on helping Islamic reformers assimilate the positive accomplishments of the Enlightenment — like the separation of religious and political authority in the modern state. Cleaning up our own cultural act is another, non-military front in this struggle: a country whose principal exports include pornography is not in a particularly strong moral position in a struggle against a religiously-shaped alternative vision of human goods.

Prayer for the conversion of our enemies is yet another “front” in the war that has been declared upon us. Yet I’ve heard very few, if any, such prayers in the past six years. Their necessity is one more thing we can’t not know.

Once More, With Feeling 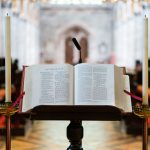 Weigel on the 2008 Election