But in celebrating today the canonizations of both Pope John XXIII and John Paul II, Francis has created a unique papal doubleheader, rich in meaning for the Catholic Church and the world. Getting to that meaning, however, requires excavating layers of misimpressions and caricatures that obscure our 21st century perceptions of two of the 20th century’s most striking figures.

It means seeing John XXIII and John Paul II as the two bookends of the Second Vatican Council, sharing a common, great intention: to see Catholicism become a more compelling agent of divine mercy in a deeply confused and badly wounded world.

Roncalli was Italian; Wojtyła, a Pole, broke the 455-year-long Italian domination of the papacy.

Roncalli had a very short papal reign, a mere four and a half years; Wojtyła had the second-longest pontificate in reliably recorded history, almost twenty-six and a half years.

Roncalli was a jolly figure of considerable girth; until Parkinson’s disease wrecked his body, Wojtyła was an accomplished athlete who, for years, snuck out of the Vatican in mufti for day-long skiing holidays.

Roncalli, as John XXIII, became famous for self-deprecating wit (Pious nun, welcoming the Pope to a convent: “Welcome, Your Holiness, I am the superior of the Holy Spirit.” Pope John: “Congratulations, Sister, I am merely the Vicar of Jesus Christ.”); Wojtyła could charm and inspire immense crowds, but he also capable of applying a public smackdown to Sandinista protesters who boorishly interrupted his sermon in Nicaragua in 1983.

There was something of the 19th century about John XXIII, who was born in 1881 and whose photographic depictions in the ancient regalia of the papacy summon up memories of a lost age of papal court splendor; John Paul II was a thoroughly modern man who deliberately led the church out of one age and into another.

Yet a closer look at these two lives reveals interesting parallels that underscore Pope Francis’s wisdom in arranging that these two predecessors be named saints on the same day.

The post-papal mythologizing notwithstanding, Angelo Giuseppe Roncalli was a man of deeply conventional and traditional Italian piety, as his posthumously published spiritual diaries, Journal of a Soul, made unmistakably clear. And his career track looks, at first blush, like that of many other upwardly mobile Italian clerics: ordained a priest at twenty-three; a bishop’s secretary for nine years; director of an Italian missionary society; a papal diplomat, with postings in Bulgaria, Turkey, Greece, and France; a seemingly career-capping appointment in 1953 as patriarch of Venice and cardinal. Elected Pope at age seventy-seven, he was expected to be a kind of placeholder for his eventual successor, Giovanni Battista Montini, who was not yet a cardinal in 1958 when Pius XII died.

Roncalli, however, was no conventional clerical careerist. As a young man, he had been identified with the reformist thinking of an Italian theologian, Antonio Rosmini, some of whose work met with ill favor in the Vatican. Even more importantly, Roncalli was a serious historian and a close student of the ministry of St. Charles Borromeo, the reforming archbishop of Milan in the 16th century; whatever the regnant view among mid-20th century Roman theologians and curial officials, Roncalli knew that the church had, in the past, adapted itself and its presentation of ancient truths to changing cultural conditions, and would have to do so again. The Catholicism of Pius XII, he understood, was not the way the church had always been, nor was it the way of being Catholic that was divinely ordained for the future.

And then there was that career path: from 1925, when he was named apostolic visitator to Bulgaria, until 1945 when he arrived in France as papal nuncio, Roncalli lived outside what might be called the “Catholic bubble.” Working with Orthodox believers and Muslims, he developed a marked interest in ecumenical and interreligious dialogue, and an appreciation for human decency in a variety of religious garbs. In France, he had to deal with a Church shattered by a century and a half of bitter contention with radical secularism and by some of its leaders’ World War II collaboration with the Vichy regime; and from that experience of rebuilding what had been shattered, Roncalli took some important ideas about the imperative of Catholicism engaging, not merely dismissing, modern cultural, social, and intellectual life.

Karol Wojtyła’s life was even more sharply defined by the trauma of the 20th century. He had survived more than five years of the Nazi occupation of Poland, living as a clandestine seminarian and risking his life in underground resistance activities; many of his childhood friends had been murdered in the Holocaust.

He had come home from post-ordination doctoral studies in Rome to a Poland smothered by the thick fog of Stalinism, and for the next 30 years he developed imaginative intellectual and pastoral strategies to keep hope alive among a hard-pressed people, beset by one totalitarian system after defeating another. The most pastorally experienced Pope in centuries, Wojtyła also had a unique insight into the challenges posed to the church by the sexual revolution; and in response to that challenge, he had consulted widely with lay friends as he developed his writings on modern sexual ethics.

Less than four months after his election as a putative papal “placeholder,” John XXIII shocked the entire Catholic world by announcing, on January 25, 1959, his intention to summon the first ecumenical (or general) council since the abrupt suspension of the First Vatican Council in 1870. And as he made clear in his magnificent opening address to the Second Vatican Council on October 11, 1962, he wanted the Council to consider how the church might better apply the “medicine of mercy” to a broken and wounded world through a fresh presentation of ancient Christian truths.

For his part, Karol Wojtyła, who participated in all four sessions of Vatican II as one of the world’s youngest bishops, shared John XXIII’s intuition that the church had to address the great crisis of late modernity, a crisis in the very idea of the human person. False ideas of what makes for human flourishing, Wojtyła was convinced, were at the root of everything that had gone wrong in a century that had begun with high expectations for the human future but that had produced, within five decades, two world wars, the Gulag and Auschwitz, and the greatest persecution of Christians in history.

John XXIII had no intention of deconstructing Catholicism or turning it into a form of liberal Protestantism; he wanted the church to bring the full symphony of Catholic truth to the world, but in terms that modern men and women could engage. And while he only lived to see the first session of Vatican II, his hope that the Council would be a “new Pentecost,” a fresh experience of the animating fire of the Holy Spirit, set in motion dynamics of self-examination in the Catholic Church that would touch virtually every facet of Catholic thought and life.

Those dynamics of reform, in turn, would be focused by John Paul II through the prism of what the Polish Pope called “the New Evangelization” – the church’s recovery of the missionary passion that had animated the first generations of Christians.

John XXIII summoned the Second Vatican Council, gave it its reformist charter, and saw it through its first difficult months. John Paul II, having experienced all four sessions of Vatican II as an influential Council father, gave Pope John’s council an authoritative interpretation through his own teaching and example. And that interpretation was built around a recovery of John XXIII’s inspired intention for the most important Catholic event in five hundred years: that Vatican II should be a new pentecostal experience, one that prepared the church for a new missionary thrust throughout the world – including those parts of the world that had abandoned their Christian heritage.

Two men, two papacies, but one Council with one great intention: that Catholicism become a more compelling agent of divine mercy in a disoriented, late-modern world: a world looking, whether it knew it or not, for its moral bearings. That is why their canonization on the same day makes eminent sense, even as it offers the entire world a valuable lesson.

Weigel is a distinguished senior fellow of Washington’s Ethics and Public Policy Center where he holds the William E. Simon Chair in Catholic Studies. He is the author of a two-volume biography of John Paul II: “Witness to Hope” and “The End and the Beginning.” 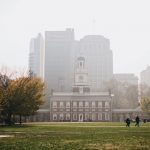