As discussion of deepening the Church’s liturgical reform unfolds, a lively conversation will likely revolve around be the question of “orientation” during Mass: Might priest and people face in the same direction, toward the Holy Trinity, during the celebration of the Eucharistic liturgy?

Father U. M. Lang of the London Oratory has done that conversation a good service with his book, Turning Towards the Lord: Orientation in Liturgical Prayer (Ignatius Press). Among Father Lang’s interesting points:

–The question at issue is “not so much the celebration of Mass ‘facing the people’ as the orientation of liturgical prayer.” Thus attempts to derail this discussion by dismissing it as a project of anti-Vatican II reactionaries eager for the priest to “turn his back to the people” should be resisted. As Father Lang writes, this cheesy sound-bite “is a classic example of confounding theology and topography, for the crucial point is that the Mass is a common act of worship where priest and people together, representing the pilgrim Church, reach out for the transcendent God.”

–This, in fact, is one of the primary purposes of the Eucharistic liturgy: it is meant to point “Christian existence toward Christ coming in glory.” This goal can be lost in what sometimes seems the “closed circle” of our present orientation. And that loss can lead, in turn, to what Father Lang calls an “eschatological deficit” in the liturgy — a deficient sense of liturgical prayer as our privileged participation in the heavenly liturgy, which anticipates Christ’s coming in glory.

–This common orientation of priest and people toward Christ, returning in glory, is deeply rooted in the origins of Christianity. Then, it was a “matter of course” for Christians to turn in prayer toward the rising sun — an orientation that was a symbol of Christ, the light of the world, and of the Church’s hope for the Lord’s return and the inauguration of the Kingdom of God in its fullness. (Interestingly enough, Islamic polemicists criticized Christians for this, claiming it was a return to pagan sun-worship.)

–In addition to this Kingdom-meaning of priest-and-people looking together toward the returning Lord, common orientation during the Eucharistic liturgy also symbolized, once, “the journey of the pilgrim people of God towards the future…” It’s worth discussing whether our present orientation contributes to a loss of the congregation’s self-awareness as God’s people on pilgrimage, through history, towards God’s promises.

–The office of the priest, not his personality, is what counts — or what should count. Thus the priest “facing the same direction as the faithful when he stands at the altar, leads the people of God in a [common] ‘movement toward the Lord, who is ‘the rising sun of history’…” Practically, what does this mean? That consideration should be given to celebrating the Liturgy of the Word with priest and people facing each other (an orientation appropriate for listening and for teaching/preaching). Then, “for the liturgy of the Eucharist in the strict sense, in particular for the canon, it is more fitting that the whole congregation, including the celebrant, be directed towards the Lord, and that is expressed by turning towards the altar,” with the priest leading the congregation in the Eucharistic prayer as all face together toward Christ, whose coming is foreshadowed in his Eucharistic Presence.

Can’t be done? Each summer, during the Tertio Millennio Seminar on the Free Society, that’s precisely how we do it in the St. Hyacinth Chapel of the Dominican basilica in Cracow. There, for reasons of space, a free-standing altar is impossible. Yet no one thinks that the celebrant is “turning his back to the people;” everyone instinctively understands that, together, we are turning towards Christ.

The liturgy can be reverently celebrated with priest and people facing each other; that, too, happens in Cracow every summer — and in many other times and places, of course. The question is whether recovering the Church’s ancient practice of a common orientation of priest and people during the Eucharistic liturgy wouldn’t make such reverent celebrations more likely, while helping the Church recover the Kingdom aspect of its Eucharistic life. That’s worth a serious discussion. 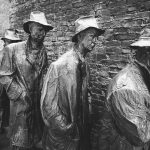 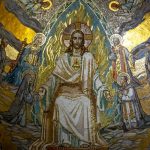