In a series of talks and interviews surrounding the announcement of his retirement as archbishop of Washington, Cardinal Theodore McCarrick frequently told his favorite John Paul II story: the story of the Pope walking up the center aisle of Newark cathedral in October 1995, touching people on both sides. This, Cardinal McCarrick suggested, was how priests and bishops ought to act — sticking to the “middle,” in order to be in touch with everyone. Or, as he told National Public Radio, “the job of a priest always forces you to the middle…We’ve got to be in the middle so that we don’t let those on the left or the right get lost.”

I have other memories of events in Newark’s magnificent Sacred Heart Cathedral that evening, of what led up to them, and of what followed.

The Clinton White House had rather brashly informed the Holy See that the President would meet the Pope at the door and escort John Paul up the aisle of the cathedral. The Holy See politely replied that the Pope would enter the cathedral the way he entered every other church in the world — without the guidance of politicians. The Holy See prevailed, and John Paul did indeed touch some of the many people reaching out to him as he walked to the sanctuary to preside over Evening Prayer. At the end of the service, two people walked down the aisle of Sacred Heart Cathedral, craftily shaking hands on all sides: President and Mrs. Clinton. John Paul II departed by a side aisle in order to pray at the Blessed Sacrament chapel. New Jersey public television juxtaposed these simultaneous events on a split screen: the politicians doing their thing, the priest and bishop being a priest and bishop. It was a striking, and telling, difference.

It’s not easy to know what Cardinal McCarrick means by his oft-repeated admonition to moderation. He certainly wasn’t moderate — he wasn’t ready to split the differences at the fifty-yard line, so to speak — when things he believed in were at stake. To take one example: students from impoverished families in Washington, D.C., can use tax-funded vouchers to attend Catholic schools because Cardinal McCarrick was thoroughly immoderate, indeed relentless, in lobbying Congress on their behalf.

Then there are questions of doctrine. Shortly before the Holy See announced that Pope Benedict had accepted Cardinal McCarrick’s retirement, R. Scott Appleby wrote in the Washington Post about three Catholics, representatives of a “people’s Church,” which Dr. Appleby described as “Catholicism’s great hope” in the 21st century: “a Jakarta nun who describes herself as both a devout Catholic and a devout Muslim; a Sri Lankan Jesuit whose Asian-inflected theology of Christ and the Church has little room for the ancient dogmatic formulas preserved by Rome; the president of a Benedictine college in Manila who has no qualms about celebrating Mass without a priest.”

Is this the fifty-yard line? Or, to vary the sporting metaphor, is this somewhere out in the parking lot, way beyond the left-field bleachers?

Jesus of Nazareth is the Christ of God or he isn’t; Mohammed is the final Prophet or he isn’t; you can’t split the difference at the fifty-yard line. Is the “ancient dogmatic formula” which attests to “Jesus Christ, His only Son, our Lord” true? Or is it false? To stand in the center of the aisle and claim to be in communion of mind and heart with people who both affirm and deny that formula is to confess to severe intellectual confusion. Is a validly ordained priest necessary for the valid consecration of the Eucharist, or isn’t he? It’s hard to believe that Cardinal McCarrick would have wanted his archdiocesan vocation director to stand in the center of the aisle on that one.

That priests and bishops must be able to minister to people across the spectrum of reasonable theological and political opinion goes, or should go, without saying. That priests and bishops can be true ministers of the Gospel by thinking and acting as if every question were a football field on which truth lies at the fifty-yard line is another matter entirely; see Revelation 3.16.

PrevNo Tears for Fidel, Please
Marriage, the Courts, and the AmendmentNext 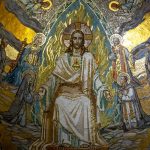