When a university invites a prominent personality to deliver a commencement address and accept an honorary degree, a statement is being made to graduates, students, faculty, parents, alumni and donors: “This is someone whose work is worth emulating.” The invitation, in other words, is not to a debate, or to the opening of some sort of ongoing conversation. The invitation and the award of an honorary degree are a university’s stamp of approval on someone’s life and accomplishment.

Which is precisely why the University of Notre Dame, which claims to be America’s premier Catholic institution of higher learning, made an egregious error in inviting President Barack Obama to address its May commencement and accept an honorary doctorate of laws degree.

Since Inauguration Day, Obama has made several judgment calls that render Notre Dame’s invitation little short of incomprehensible. The president has put the taxpayers of the United States back into the business of paying for abortions abroad. He has expanded federal funding for embryo-destructive stem-cell research and defended that position in a speech that was a parody of intellectually serious moral reasoning. The Obama administration threatens to reverse federal regulations that protect the conscience rights of Catholic and other pro-life health-care professionals. And the administration has not lifted a finger to keep its congressional and teachers’ union allies from snatching tuition vouchers out of the hands of poor inner-city children who want to attend Catholic schools in the nation’s capital.

How any of this, much less the sum total of it, constitutes a set of decisions Notre Dame believes worth emulating is not, to put it gently, easy to understand.

John Paul II, Pope Benedict XVI and the Catholic bishops of the United States, following the teaching and intention of the Second Vatican Council, have all declared that the defense of life from conception until natural death is the premier civil rights issue of our time. It is important to remember, however, that the Catholic defense of the right to life is not a matter of arcane or esoteric Catholic doctrine: You don’t have to believe in the primacy of the pope, in seven sacraments, in Mary’s assumption into heaven, in the divine and human natures of Christ—you don’t even have to believe in God—to take seriously the Catholic claim that innocent human life has an inalienable dignity and value that demands the protection of the laws. For that claim is not a uniquely Catholic claim; it reflects a first principle of justice that anyone can grasp, irrespective of their religious convictions or lack thereof.

Moreover, it is precisely that claim—that all members of the human family have a dignity and worth that law and public policy must recognize—that once led men like Notre Dame’s former president, Father Theodore M. Hesburgh, to work for decades on behalf of civil rights for African-Americans. That claim and that work made it possible for Obama to be elected president of the United States. And, in a bitter irony, it is precisely that claim that is contradicted, indeed trampled on, by the Obama administration’s policies on a whole host of life issues. This is what Notre Dame wishes to propose as worth emulating, by the award of an honorary doctorate of laws? This is what a Catholic institution dedicated to the idea that all law is under moral scrutiny wishes to celebrate? The mind boggles.

If Notre Dame wished to invite Obama to debate the life issues with prominent Catholic intellectuals during the next academic year, it would have done the country a public service and no reasonable person could object. If Notre Dame had invited the president to address a symposium on the grave moral issues the president himself acknowledges being at the heart of the biotech revolution, that, too, would have been a public service. For that is one of the things great universities do: They provide a public forum for serious argument about serious matters touching the common good. But, to repeat, a commencement is not a debate, nor is a commencement address the beginning of some sort of ongoing dialogue, as Notre Dame officials have tried to suggest. A commencement address and the degree that typically accompanies it confer an honor. That honor is, or should be, a statement of the university’s convictions.

By inviting Obama to address its commencement and by offering him an honorary doctorate of laws, Notre Dame’s leaders invite the conclusion that their convictions on the great civil rights issues of our time are not those that once led Hesburgh to stand with Dr. Martin Luther King Jr. and proclaim an America in which all God’s children are equal before the law. And that is very bad news for all Americans.

— George Weigel is a distinguished senior fellow of Washington’s Ethics and Public Policy Center, where he holds the William E. Simon Chair in Catholic Studies.

This article was originally published on Chicago Tribune
http://www.chicagotribune.com/news/opinion/chi-perspec0329weigelmar29,0,1658251.story

PrevA Moral Exemplar?
The Pope Versus the VaticanNext 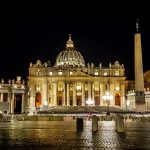