They may have seemed, at first blush, an unlikely pair: the American B-movie actor turned conservative politician, and the mystical, philosophical, poetically inclined Polish priest turned Pope. Yet historical coincidences that both would describe as providential led them to become the chief figures in the collapse of European Communism. Moreover, the dynamics of the relationship between Ronald Reagan and John Paul II teach us something important about how history actually works.

Journalistic fantasists like Carl Bernstein notwithstanding, there was no “holy alliance,” no conspiracy between President Reagan and Pope John Paul to bring down the Soviet empire. For the hard, chronological fact of the matter is that John Paul II did his maximum damage to the Communist enterprise during his epic first pilgrimage to Poland in June 1979, 19 months before Reagan became president. But if there was neither alliance nor conspiracy, there was a common purpose born of a set of shared convictions. And the convictions were decisive for their way of governance, as both men displayed a calm but settled determination to trust their own instincts rather than the conventional wisdom of those in Washington and the Vatican who imagined themselves more realistic about world affairs.

The fact that they were both actors made a great difference — not only in terms of communication skills, but even more importantly in shaping how both men looked at the human condition and its possibilities. The president and the Pope never discussed their respective theatrical careers in any depth. They didn’t have to. Each recognized in the other a shared sense of the drama of late-20th-century life and of Communism’s role in that drama. Both were convinced that Communism was not simply a matter of stupid economics; it was a moral evil, an affront to human dignity, and a danger to mankind’s dramatic quest for freedom. They also shared theater-based convictions about the power of the spoken word to shape lives and destinies. Knowing that Communism was a lie, both sensed that speaking truth to Communist power could cut through the fog of mendacity in totalitarian societies and give oppressed peoples tools of resistance that Communism could not blunt.

And both demonstrated in action that this conviction was no romantic fantasy. When President Reagan boldly described the Soviet Union as an empire run by an evil system, as when John Paul II dramatically challenged his Polish countrymen to reclaim their national culture and identity in June 1979, statesmen who imagined themselves more realistic and prudent cringed. But the souls of ordinary men and women were stirred, and from aroused consciences a new type of revolution was born.

Above all, and in sharp contrast to their more cautious advisers, both Reagan and John Paul were convinced that Communism could — indeed must — be defeated, not simply accommodated. Neither man came to high office with a detailed plan for victory; both likely expected, in the late 1970s, that the struggle would continue beyond their lifetimes. Yet when Reagan watched John Paul’s momentous Mass in Warsaw’s Victory Square on June 2, 1979, he was deeply moved (according to his aide, Richard V. Allen). And it is not beyond the realm of possibility that, on that same day, both these men, who had never met but whose lives and leadership were soon to be entwined, came to the same strategic intuition: The Communist emperor had far fewer clothes than previously imagined.

John Paul’s 1979 Polish pilgrimage ignited a revolution of conscience in east-central Europe that gave birth within 13 months to the Solidarity movement, and inspired similar eruptions of civil resistance throughout the Warsaw Pact. That revolution of conscience made possible the nonviolent political Revolution of 1989 — which in turn led to the Soviet crack-up in 1991. Yuri Andropov, no fool, knew that the election of Karol Wojtyla as Pope was very bad news for the Soviet external empire and the Soviet Union itself; he set in motion operations that led, eventually, to the assassination attempt on John Paul in May 1981. But John Paul’s “soft power” revolution had a chance for success because of the “hard power” context in which it unfolded throughout the 1980s: the rearmament of the West on which Reagan insisted and the robust ideological challenge that Reagan (who also survived a 1981 assassination attempt) mounted. Neither the Pope’s soft-power revolution nor Reagan’s hard-power challenge could have done the job by itself. Each needed the other. Together, they provided the keys to victory. Without formal coordination, even without very much discussion between the principals, Reagan and John Paul pursued, with astonishing success, parallel courses toward the same end: the defeat of Communism and the restoration of east-central Europe to freedom.

In a picture-driven media age, images of the white-clad Pope bending over American satellite reconnaissance photography while being briefed (on Reagan’s instructions) by William Casey or Vernon Walters can seem the stuff of which history is made. The truth is that the convictions these two giant figures shared were far more important.

Their entwined destinies stand as a powerful reminder that worldly realism isn’t entirely realistic when it factors the realm of the human spirit out of the policy calculus. History is not simply the story of the contest for political power. Still less is history the exhaust fumes of the “means of production.” At the end of a century that began with confident expectations of religion withering away, religious belief and moral conviction — supported by the judicious exercise of power — bent history’s course in a more humane direction.

The two true believers were right, after all.

This article was originally published on National Review
http://www.nationalreview.com/magazine/20040628/full.asp

PrevTelling the World Its True Story
Catholic confusions in the CongressNext 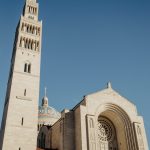 Whose Fringe? What Mainstream?