The Pope on Abortion, Politicians, and Communion

Flying to Brazil on May 9, Pope Benedict XVI was asked whether he supported the excommunication of Mexican legislators who had voted to legalize abortion. The Pope replied, “Yes, this excommunication was not something arbitrary, but is foreseen by the Code [of Canon Law]. It is simply part of Church law that the killing of an innocent baby is incompatible with being in communion with the body of Christ.” That seemed clear enough, until Father Federico Lombardi, S.J., the papal press spokesman, went though the press section of the papal plane and told reporters that the pope “was not announcing a new policy on Catholic politicians,” and that in any case, as the Mexican bishops had not pronounced a formal excommunication of the legislators, the Pope wasn’t doing so.

The next day, a transcript of the Pope’s impromptu press conference was posted on the Vatican Web site, in Italian; alert observers like my friends John Thavis of CNS, Philip Pullela of Reuters, and Victor Simpson of the AP (who seems to have been covering popes since Linus, Cletus, and Clement) reported that the transcript had altered what the Pope had actually said. The “Yes” at the beginning of his answer (which might have been a bit of rhetorical throat-clearing, much like someone saying “Well…) had been deleted, as had the references to Mexican bishops. Not altogether reassuringly, Father Lombardi went on to note that this was  standard procedure, as the Vatican Secretariat of State “reviews and cleans up” the Pope’s remarks “every time the Pope speaks off the cuff.”

All of which tended to create, unnecessarily, an image of confusion, vacillation, and, as Vic Simpson put it, a “roll back” of a tough papal stance. In fact, however, there is considerable clarity beneath the surface confusion, and it’s worth noting precisely what’s clear.

First, it is the settled conviction of the Catholic Church that a legislator’s facilitating abortion through a vote to legalize or fund the procedure puts that legislator outside the communion of the Church. The Pope seems content to leave it to moral theologians to determine precisely how this form of cooperation with grave evil touches on legislators (as distinguished, say, from abortionists). But that a public official’s act in facilitating the “killing of an innocent human baby” is “incompatible with being in communion with the body of Christ” is not in doubt. And if one’s communion with the body of Christ that is the Church is radically ruptured, then one must not present onself for Holy Communion — for that is to add a lie to the original offense against justice, the taking of an innocent human life.

Second, Benedict’s answer indicates that he will support the actions of those bishops who deem it a pastoral necessity to order that politicians in this position of estrangement from the Church not be given Holy Communion. Anyone who expects Pope Benedict to distance himself from the American bishops who have taken this stand is likely to be disappointed.

And third, the Pope’s answer suggests that he is prepared to leave the pastoral judgment on these cases to the discretion of the local bishops, who are presumably better-informed about the circumstances than he is: and by “circumstances,” I do not mean “balancing” serious (and, some would argue, canonically required) sanctions against wayward politicians with other prudential considerations, but the specific circumstances of Legislator X. All of which is to say that Pope Benedict seems unlikely to issue a universal edict on the subject.

This may well be good ecclesiology and prudent pastoral practice, but it is very difficult to communicate without appearing to vacillate. Thus it would be helpful if the Holy See would, on some future occasion (and not six months from now) underscore that a) deliberate legislative facilitation of abortion is a grave evil that puts one outside the communion of the Church and thus renders the reception of Holy Communion a dishonest act, and b) that, when local bishops choose to forbid obstinate politicians from receiving Holy Communion for this reason, they will receive the full support of the Holy See. 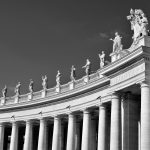