The Nobility of Cardinal Dulles

If the United States had a nobility, Avery Dulles would have been born into it. His great-grandfather, John W. Foster, and his great-uncle, Robert Lansing, both served as Secretary of State. So did his father, John Foster Dulles, who also negotiated the post-World War II peace treaty with Japan.

Avery Dulles’s uncle, Allen Dulles, was a legendary World War II spymaster and the first director of the Central Intelligence Agency. Aunt Eleanor, whom many thought more formidable than her brothers, Foster and Allen, negotiated the Austrian State Treaty that pried the Red Army out of Vienna in 1955.

How did all this staunch Presbyterian stock produce a Catholic convert, a Jesuit priest, and the first American theologian to be raised to the cardinalate?

The answer is encoded in the motto on Cardinal Avery Dulles’s coat-of-arms, Scio cui credidi [I know in Whom I have believed]: St. Paul’s simple-yet-profound explanation to Timothy of why he was not concerned about his sufferings or his future. That faith came to Avery Dulles in stages. He left prep school an agnostic, but a chance encounter with a blossoming tree on a soggy day during his undergraduate years at Harvard inspired the conviction that the world was governed by “an all-good and omnipotent God,” as he later put it. How might that conviction be embodied institutionally, though?

Slowly, Avery Dulles came to appreciate the subtlety, depth and coherent structure of Catholic doctrine. Here was the truth, nobly expressed: the only possible response was to adhere to it, heart, mind and soul. That is what Avery Dulles has done for 68 years, since he entered the Catholic Church in 1940.

That adherence to the truth of Catholic faith has been the organizing principle of his extensive theological work — more than 20 books, and over 700 articles. Avery Dulles has been a theologian of the tradition, explicating ancient truths, stretching them a bit, exploring their implications, but never seeking cheap originality or sound-bite fame.

That modesty of purpose has gone hand-in-hand with an evangelical modesty of person. One does not often see cardinals of the Holy Roman Church repairing their shoes with duct tape, or walking across campus in cheap blue windbreakers; the cardinal’s sartorial style would cause pain at Men’s Wearhouse (not to mention Brooks Brothers).

There is no affectation here, though; Avery Dulles took a vow of poverty when he entered the Society of Jesus and he has kept it, as he has kept his vows of chastity, obedience to superiors, and that special obedience to the Pope which is the distinguishing hallmark of classic Ignatian life.

His nomination as a cardinal came as a complete surprise to him, if not to others. The night it was announced, my wife and I were entertaining friends who were also close to Father Dulles. As dinner began, the phone rang: it was the newly-nominated cardinal, who brushed aside my congratulations and asked whether it was possible for him to be dispensed from the canonical requirement of becoming a bishop. I assured him that the dispensation would be readily given, as it had been for other elderly theologians whom John Paul II honored with the red hat; there was a sigh of relief at the other end of the phone. The whole exchange was yet another expression of Avery’s modesty.

Still, cardinals employ the miter and crozier when they preside liturgically. So on the night of February 23, 2001, Cardinal Avery Dulles processed into the Church of the Holy Names of Jesus and Mary to take possession of his Roman “title,” vested as none of us had ever seen him before. At which point Jody Bottum, now editor of First Things, leaned over and whispered, “Now we know what Abraham Lincoln would have looked like in full pontificals.”

Suffering today from the ravages of post-polio syndrome, the cardinal’s humble, even grateful submission to the will of God is a model for us all. Avery Dulles, a noble soul, knows in Whom he has believed. That has made all the difference.

PrevThe Pope and the Universities
Latin Days Are Here Again?Next 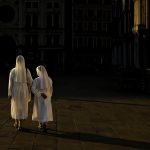