In the early 1990s, I was given lunch at the Roman headquarters of the Society of Jesus by two very–no, make that extremely–high-ranking Jesuits. The table-talk turned to a fascinating question: Are there permanent religious charisms in the Church? Most religious congregations die within a century of their founding; our Lord might delay his return for tens of thousands of years, so that we are the “early Church.” Given that fact and that possibility, could we, today, judge that there are permanent religious charisms in the Church, gifts of the Holy Spirit that will endure institutionally in religious orders?

My interlocutors quickly agreed that the Benedictine charism was enduring; that something like the Franciscan charism was certainly a permanent feature of Catholic life; and that there might be something enduring about the Dominican charism (a considerable concession for Jesuits!). What surprised me was that neither of my hosts argued that the Ignatian charism could, today, be judged an enduring one–“we’ll see,” was the gist of their discussion of the permanence of their own community’s distinctive spiritual character.

This not only surprised me; it saddened me. Because I thought then, as I think now, that the New Evangelization proclaimed by John Paul II very much needs the distinctive combination of spiritual élan, intellectual heft, missionary zeal, self-sacrificing obedience to the Pope, and evangelical joie de combat that is the unique charism of the Society of Jesus. That 15-year-old discussion on the Borgo Santo Spirito was in the back of my mind when I wrote recently in this space about challenges facing the Society of Jesus and its new General, Father Adolfo Nicolas; that concern for the vitality of the Jesuit future framed my questions to the new Jesuit leader.

For that reason, I am very grateful to the Jesuits–young, old, and in-between–and the friends-of-Jesuits who have thanked me for bringing into public discussion issues that are widely and urgently discussed among them. For that same reason, it is regrettable that some read my “Questions for Father General” as a blanket indictment, even condemnation, of the Society of Jesus–an interpretation that strikes me as counterintuitive, given what I wrote at the end of the column about my prayer for Father Nicolas’s success in his leadership of a “great religious congregation.” Still, columns being what they are, and readers being what they are, misunderstandings occur; I hope the context I describe above helps clear up at least some of the misunderstandings that have ensued.

The challenges I noted–the challenge to bring the truth of Catholic moral and social teaching into public life; the challenge to enhance the Catholic identity of Catholic institutions of higher learning; the challenge to live evangelical chastity in a culture saturated with various forms of eroticism; the challenge to Christological orthodoxy, at a time of intellectual confusion in the West and amidst a global supermarket of “spiritualities”–are obviously not challenges for Jesuits alone; every religious community, and indeed every serious Catholic, faces them. That they are challenges for Jesuits, though, is not a matter of personal opinion but of the public record. I might add that these are matters I have discussed with Jesuit friends for decades–including young men whose Jesuit vocations I have tried to nurture.

My work in the 1980s to rescue the great Jesuit theologian of the American experiment, John Courtney Murray, from intellectual oblivion; my work with the U.S. Congress to free a brave Lithuanian Jesuit, Sigitas Tamkevicius (now archbishop of Kaunas), from the Gulag; over a quarter-century of intellectual work with Jesuits ranging from Cardinal Avery Dulles to members of the Pontifical Gregorian University faculty–all testify, I hope, to my regard for the Ignatian charism. Like my column, my work with Jesuits has been an expression of my conviction that the Ignatian charism ought to be a permanent one– and my hope that the community which gave the Church such heroes as Francis Xavier, Edmund Campion, Robert Southwell, Isaac Jogues, Miguel Pro, and Alfred Delp might be renewed in the image of their radical fidelity.
A.M.D.G. 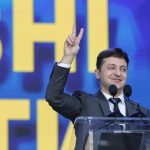 Ukraine’s Presidential Election Was, among Other Things, a Rebuke to Moscow

CAMPAIGN 2008: America and the World