We begin here a new department that will report on events, arguments, and personages testing the meaning and limits of those changes in Soviet life and policy that are subsumed by our press under the all-purpose moniker of glasnost. AMERICAN PURPOSE is not a journal specializing in Soviet affairs, but, as we have argued time and again this past year, the pluralization (perhaps better, de-Leninization) of the Soviet Union is one precondition to a genuine peace. Thus our interest in the news, good and bad, on the glasnost front.

EXILED POET JOSEPH BRODSKY’S WINNING of the Nobel Prize for Literature received, well, mixed Soviet reaction. The now-ubiquitous Gennadi Gerasimov, spokesman for the Soviet Foreign Ministry, allowed as how the award was a “good thing” because it would focus attention on the accomplishments of 20th-century Russian poetry. But on the subject of Brodsky himself, Gerasimov was less enthusiastic: “The tastes of the Nobel committee are strange sometimes.” As Boris Pasternak and Alexander Solzhenitsyn had reason to discover, no doubt.

Several days before the announcement of Brodsky’s award, however, an unsigned editorial in the Soviet Communist party’s official theoretical journal, Kommunist, noted that, “The mightier the Soviet state became, the more cowardly, mistrustful, and often suspicious were the departments and official organs in charge of culture.” Asked about the editorial, Joseph Brodsky said, with a laugh, “It’s about time.”

SOVIET PARTICIPANTS IN EXCHANGE PROGRAMS of various sorts seem to have taken a new tack when the subject of human rights violations in the USSR is raised. According to the old pattern, questions about Moscow’s adherence to the human rights provisions of the U.N. Charter, the Universal Declaration of Human Rights, and the Helsinki Final Act were met with one or both of two stock responses: the charges were lies, and/or they constituted unwarranted interference in the internal affairs of the Soviet Union.

Now, doubtless under the influence of former Ambassador to the U.S. Anatoly Dobrynin, a new form of Soviet hardball is being played. “You want to talk about human rights? Fine. What about the homeless in New York?”

About which, curiously, the Soviet weekly Literaturnaya Gazeta had some notable things to say recently. According to a Reuters report, Literaturnaya Gazeta complained that “Soviet citizens released from prisons and labor camps are being turned into homeless vagabonds by the country’s archaic internal passport rules…. The newspaper published letters calling for repeal of rules introduced in 1932 that forced Soviet citizens to live only in the city or town indicated on their internal passports. The letters said the rules violated the Soviet Constitution by creating a class of homeless people who, without residency permits, were also unable to find jobs. The constitution defines shelter and employment as basic rights for all, a clause Soviet authorities have frequently cited in defending human rights records.”

ONE OF THE MOST DESPICABLE of human rights violations in the USSR is the abuse of psychiatry for political purposes: specifically, the incarceration of dissidents and their injection with mind-deforming drugs in special “hospitals.” This grotesque practice, which has been occasionally criticized in the Soviet press during the Gorbachev era, is a crucial barometer of the limits of glasnost because it could be stopped immediately were the word to come down from the Communist party leadership.

Yet Vladimir Titov, a political dissident released in October from the “security psychiatric” hospital [sic] in Oryel claimed that “there are no changes…. [O]n the contrary, it’s getting nastier.”

According to a New York Times report, “Mr. Titov’s most vivid recollections were of the two strong psychotropic drugs that caused fever, pain, slurred speech and left him unable to lie, sit, or stand comfortably.” At a Moscow news conference, Titov “… also spoke movingly of the dissidents still inside [the “hospitals”], while other human rights advocates … played a tape of a woman patient, Sirvard Avakian, an Armenian dissident, asking in a trembling voice for Western help in releasing her from the abuse of her doctors.”

In the chamber of horrors that is politically abusive Soviet psychiatry, the diagnosis that puts men and women like Titov and Avakian at the mercy of the state is termed “sluggish schizophrenia,” which is said to manifest itself in an obsession “to seek social justice” that is masked by otherwise “normal” behavior. It is this quackery that permits psychiatric torturers like the well-named Marat Vartanyan (a corresponding member of the Soviet Academy of Sciences, no less) to opine that “Psychiatrists have a duty to safeguard society from disorganizing and sometimes dangerous steps by the insane”—who are, by definition, anyone displaying an “obsession” with “social justice.”

During his October visit to the United States, Soviet Foreign Minister Eduard Schevardnadze hinted that the “sluggish schizophrenia” diagnosis might be struck from Soviet psychiatric textbooks. That, we suggest, is the very least that could be done. The political abuse of psychiatry could be shut down rapidly were the will to do so evident among senior party officials. Perhaps one way for Americans to support the gathering of that will would be to refuse to have anything to do with the odious Marat Vartanyan, who has become a regular participant in U.S./Soviet “citizen exchange” programs. Would Americans meet over coffee and cakes with Josef Mengele? Q.E.D.

WHEN SOVIET TROOPS GOT TO BERLIN in May 1945, according to the London Spectator, “… special units located and ‘put into safe-keeping’ all records of the Stalin-Hitler negotiations, including the crucial documents relating to the Ribbentrop-Molotov meeting in November 1940. Needless to say, they have been ‘safe’ ever since.”

Here, then, is another test of the boundaries of glasnost: will the Soviet Union open the files on these crucial negotiations and permit reputable Western scholars, perhaps working with Soviet colleagues, access to the documentary record of the Hitler-Stalin pact? And if so, will the results of that research be published without censorship in the USSR? 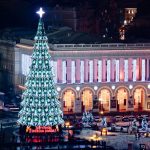