When John Carroll was named the first Roman Catholic bishop of the United States in 1789, this middle-aged son of the Maryland aristocracy had a daunting task on his hands. Carroll’s Diocese of Baltimore encompassed the entire country, and the new bishop had fewer than 30 priests to deploy (a few being troublemakers sent to the former colonies by nervous bishops in Europe). There were no Catholic schools; there were no religious orders; there were rowdy arguments over the ownership of church property and the appointment of pastors, and anti-Catholic sentiment was widespread in the land. Over the 25 years of his stewardship, John Carroll carefully addressed each of these problems, and by the time of his death in 1815, he had laid the foundations of a Catholic Church that would, over the next two centuries, come to compose more than a quarter of the national population.

<textBodyBlack$3>In planning the first Catholic cathedral in the United States, Archbishop Carroll (as he became in 1808) wanted to create a building that would bear witness to the first of American liberties, religious freedom. So this devout Catholic and American patriot secured the services of the newborn country’s premier architect, Benjamin Henry Latrobe, and asked him to design a cathedral church that would embody a conviction Carroll shared with Thomas Jefferson: that “the God who gave us life gave us liberty, at the same time.” Latrobe, who may have consulted his friend Jefferson about his plans, took time from his duties as architect of the Capitol to create a masterpiece of Federal-period architecture and a living embodiment of faith and reason in concert.

<textBodyBlack$3>The key to Latrobe’s design was light: light streaming into the body of the Baltimore cathedral through skylights in its Pantheon-like dome. Alas, over the centuries, the light that Carroll and Latrobe intended as a metaphor for religious freedom was lost, as the skylights were removed from the dome, the plain glass windows were replaced with stained glass, and a new decorative scheme featuring grays and darker blues made the Baltimore cathedral a kind of shadowland. Now, thanks to a two-and-a-half year, $32 million restoration effort that will culminate in the old Baltimore cathedral’s reopening on Nov. 4, 21st-century Americans can experience the luminosity that Carroll and Latrobe intended in the early 19th century.

<textBodyBlack$3>The skylights and Latrobe’s unique double-dome system have been restored; so have the original plain-glass windows and the original colors of Latrobe’s decorative scheme. The result is a stunning American evocation, in stone and light, of the universal human search for truth, goodness and beauty. Not unlike the ethereal glass of Chartres and the soaring nave of Yorkminster, the diffused light of the Baltimore cathedral was meant to create an experience of the transcendent–and to remind those who entered, for prayer or simply for quiet, that a society is only as great as its spiritual aspirations.

<textBodyBlack$3>There is need for such reminders today. Religious freedom is under assault throughout the world, often by forces of irrationality that deny the link between faith and reason that animated the American founding. When its cornerstone was laid in 1806, America’s first Catholic cathedral was an expression of the Catholic commitment to the success of the American democratic experiment. Today, as it begins its third century of service to the nation, Baltimore’s magnificently restored old cathedral can and should stand as a witness to two great truths.

<textBodyBlack$3>The first, as Pope Benedict XVI once wrote, is that “God wishes to be adored by people who are free.” The second is that the strongest foundation for religious freedom is not religious indifference but rather the religious conviction that God commands us to respect the human search for truth in what the late John Paul II called “the sanctuary of conscience.”

This article was originally published on Newsweek Online
http://www.msnbc.msn.com/id/15535662/site/newsweek/ 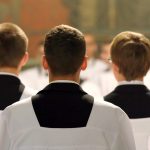 In Praise of Today’s Seminarians