They were two of the giant figures of the last half of the twentieth century — Ronald Reagan and John Paul II — and they had many things in common. Both were trained actors whose craft had taught them the power of words to change minds and hearts. Both came to eminence through unconventional routes, and against the grain of a lot of the common wisdom. Both had a healthy skepticism about the conventions that surrounded their offices, and both intuited that diplomats, no matter how skilled, might have a professionally ingrained caution that blinded them to certain opportunities for bold action. Both survived assassination attempts and came to a deeper understanding of life-as-vocation as a result.

The outlines of the story are reasonably well known: John Paul first came to Reagan’s attention when the Pope’s epic first papal pilgrimage to Poland in June 1979 set in motion what eventually became the Solidarity movement — a movement Reagan, an old union leader, instinctively appreciated. Shortly after his inauguration, President Reagan sent his friend (and future Holy See envoy) William A. Wilson to Anchorage, Alaska, where the Pope’s plane was refueling, to greet the pontiff on Reagan’s behalf. We also know of the two leaders’ subsequent meetings in both Rome and the United States, and of Reagan’s determination to push U.S. diplomatic recognition of the Holy See through a U.S. Senate nervous about residual anti-Catholicism in some parts of America.

There has also been a lot of nonsense written about the relationship, primarily by Carl Bernstein of Watergate fame, who for years perpetrated a “Holy Alliance” conspiracy theory, according to which the two men entered into a secret bargain to bring down communism. As the Anderson’s book confirms, this was, and is, pluperfect nonsense, as is the claim (often heard in the 1980s) that John Paul II had agreed not to criticize either U.S. missile deployments in Europe or U.S. policy in Central America in exchange for Reagan administration support of Solidarity.

The new revelation about the relationship in the Andersons’ book is that the Pope and the President had an extensive correspondence, involving dozens of letters back-and-forth, which Professor Martin Anderson told me were by far among the most interesting of all the Reagan letters he had examined. Among the letters referenced in Reagan’s Secret War is a January 1982 letter from the White House to the Vatican in which Reagan shifted the subject of the exchange from events in Poland (which had just been put under martial law) to his hopes for genuine disarmament, not just arms “control,” at the talks about to begin with the Soviet Union in Geneva.

Indeed, the Andersons’ book makes clear that, somewhat to the consternation of many of his close advisers, Ronald Reagan was a nuclear abolitionist: he really did believe, as he often said, in ridding the world of nuclear weapons. His instruments for doing so — ramping up U.S. missile capability to demonstrate that America couldn’t be outmuscled, and the strategic defense initiative as an insurance policy — were bitterly criticized by the liberal arms controllers, whose influence on the deliberations of the U.S. bishops as they prepared their 1983 peace pastoral was, to put it gently, considerable. But as the Andersons demonstrate, it was Reagan who was the true radical in this business: the man who wasn’t satisfied with simply managing an arms race, the man who wanted to put the nuclear genie back into the bottle. Historians of U.S. Catholicism will thus be grateful to the Andersons for clarifying just how mistaken some of the policy assumptions underlying “The Challenge of Peace” were.

In my own conversations with the late pontiff, John Paul often asked how President Reagan was doing and was saddened to learn that Alzheimer’s Disease had robbed him of even the memory of being president. An extraordinary pair of men; may they both rest in peace.

PrevJudging Justices, Catholic and Otherwise
"Caritas in Veritate" in Gold and RedNext 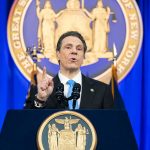