He came to the papacy burdened by the cartoon image of “God’s Rottweiler” and the fact that he had been a very reluctant draftee into the Wehrmacht during World War II. What Joseph Ratzinger displayed over the seven-and-a-half years of his pontificate, however, was an acute sense of the crisis of western democracy at this moment in history. A German pope who publicly thanked the people of the United Kingdom for winning the Battle of Britain was, clearly, a man with an unusual perspective on, and insight into, contemporary history.

That insight was on full display in his instantly controversial Regensburg lecture of September 2006, where a robust quote from a medieval exchange between a Christian and a Muslim obscured the hard truths that the pope proposed: that Islam and “the rest” could only live together peacefully if Islam found within itself the intellectual resources to warrant religious toleration and a separation of religious and political authority in a 21st century Islamic state. The uproar that followed was unfortunate; the issues Benedict XVI put on the table of world discussion remain completely salient.

Then there was the pope’s 2008 address to the General Assembly of the United Nations. There, like his great predecessor, John Paul II, he defended the universality of human rights while urging the world to a deeper understanding of the human dignity from which basic human rights flow. Rights as mere trump cards for claims of personal lifestyle preference, the pope suggested, could easily be bent to authoritarian, even tyrannical ends. A polite yawn followed; but the issue of how a world that can only affirm “your truth” and “my truth” can possibly defend basic human rights remains as urgent today as when the German professor-pope stood at the U.N.’s marble rostrum almost five years ago.

Benedict XVI also understood the democratic world’s need for morally serious political leadership: for men and women who would see politics as a vocation, not simply a career. In his shy, even delicate, way, he underscored that point when he addressed the great and good of Britain in historic Westminster Hall in 2010-and gently pointed out that this was where politicians and judges of easy conscience had condemned Thomas More, a man of firm conscience, for fidelity to the truth. Joseph Ratzinger was too sensitive to the feelings of others to ham-handedly contrast the “man for all seasons” with today’s politician-of-the-instant-sound-bite. But the contrast was there for all with eyes to see and ears to hear.

These acute insights into the cultural and political turmoil beneath the surface of Western public life came from a man of deep learning, whose knowledge was refined by faith — and here, too, was another lesson Benedict XVI taught the post-modern world. Postmodernity-or, perhaps better, the last-gasp hyper-modernity of the New Atheists like Richard Dawkins — imagines faith and reason to be utterly incompatible. Ratzinger knew better. His papal teaching stressed that, while faith without reason is superstition, reason without faith is self-cannibalizing and can easily deteriorate into various forms of irrationality. A self-enclosed secularist world, without windows, doors, or skylights, stifles the human spirit, including the human capacity to think clearly. The world imagines faith a danger to the democratic project; Ratzinger knew that the real, home-brewed danger to 21st-century democracy is an anorexic faux-rationalism that cannot speak coherently of the self-evident moral truths on which democracy rests.

He was thus a man of subtle surprises, this aging academic who reluctantly accepted the papacy as a duty laid upon him, and who had the humility to leave the stage by his own decision when he made the judgment, in conscience and prayer, that he could no longer give the Church the service it needed and deserved.

The world, too, needed Joseph Ratzinger, although it rarely acknowledged that. Perhaps now, as he retires to a reserved life of prayer and reflection and the controversies that swirled around his person recede, the world will start paying the thought of this lucid analyst of the democratic possibility the respectful attention it deserves.

This article was originally published on The Daily Beast
http://www.thedailybeast.com/articles/2013/02/12/pope-benedict-was-a-powerful-voice-for-moral-political-leadership.html 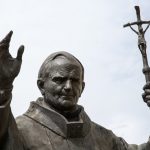 A Cinematic Lesson in Hope