When the most diverse college of cardinals in the history of papal elections chose Joseph Ratzinger as Pope Benedict XVI in one of the three shortest conclaves in modern papal history, it put an international stamp of approval on the pontificate of the man history will likely know as John Paul the Great. For the election of the man who had been John Paul’s closest theological collaborator for more than twenty years was the clearest possible signal that the Catholic Church’s senior leadership wanted the new pontificate to continue along the paths boldly explored by the Polish pope: the robust proclamation of Christian orthodoxy in a contemporary key; a forthright defense of basic human rights, including the “first right” of religious freedom; a vigorous engagement with other Christian communities, other religious traditions, and the worlds of culture and science; a vision of human dignity that will allow humanity to chart a course through the temptations posed by the sexual revolution and the new biotechnologies.

The first year of Benedict XVI’s pontificate has met the expectation that Joseph Ratzinger’s would be a papacy in dynamic continuity with Karol Wojtyla’s. There have been differences of tone, emphasis, and style; all of these are entirely understandable, given two different human personalities. John Paul II had a dynamic, even effervescent, public personality. Benedict XVI’s is a quieter style, yet compelling in its own way. But that these two popes entirely agree that Christianity offers the world the truth about itself — not simply the-truth-for-Catholics, or the-truth-for-Christians, or the-truth-for-religious-believers, but the truth about the world’s origins and the world’s destiny — no one can doubt. And that rock-solid conviction, far from turning these men into “sectarians,” opens them up to a genuine dialogue with late modernity.

The Catholic Church does not reinvent itself with each new pope; the truths of Catholic faith and practice are not “issues” which popes can resolve as they please, as governments can change the tax rate or the speed limit on the highways. Thus Pope Benedict XVI’s first encyclical, Deus Caritas Est, brings the Church and the world back to the most basic theme of Christianity: the teaching that the story of God’s encounter with the world is essentially a love story. Some commentators were, by their own admission, surprised that the allegedly fierce Ratzinger, the “Panzerkardinal,” could write so eloquently about love, and the human thirst for a love that truly satisfies the longings of the human heart. But that was because some people foolishly believed the cartoon of Joseph Ratzinger that had been sold to the western press by Ratzinger’s theological enemies. Now, the real Ratzinger is on display, and the world can see, as Poland will see in person this month, a man very much worth meeting.

What does it mean that Pope Benedict’s pilgrimage to Poland is one of his first trips abroad as pontiff? It surely means that the pope wants to thank the Polish people and the Polish Church for the gift of John Paul the Great. And the fact that Benedict will spend time in places that meant a great deal to Karol Wojtyla – Czestochowa, Wadowice, Kalwaria Zebrzydowska – suggests a deeper, but parallel, message: the lessons that Karol Wojtyla learned in these places are not lessons for Poland only, but lessons of importance for the Church throughout the world. And in proposing this, Pope Benedict will underscore an important point: that John Paul II’s pontificate was not an ethnic curiosity, but rather a pontificate shaped by a distinctive national and cultural experience that was of universal importance for the world Church.

Pope Benedict XVI faces many of the challenges faced by his distinguished predecessor — which is also understandable, given the complexity, and in some cases intractability, of certain problems. Once crucial example is contemporary Europe. Europe is dying, demographically; that demographic decline is the expression of a cultural crisis and a spiritual crisis; Europe can only recover its civilizational confidence by re-engaging with its biblical and Christian roots. That was John Paul’s conviction; that is Benedict’s conviction, too. Thus I expect — I hope — that Pope Benedict will challenge Poland to be a leader in Europe’s rediscovery of the Christian sources of its unique civilizational accomplishment. The European Union was conceived by Christian statesmen — Adenauer, de Gasperi, Schuman — as the political project of a pan-European Christian culture: a culture that had shaped many different national experiences; a culture that could provide the most sturdy foundations for post-war Europe’s commitments to civil society, human rights, the rule of law, and democracy; a culture that could shape Europe’s reintegration as a political community. Much of “Old Europe” has forgotten that history, or, worse, has rewritten it. Poland could play a key role in the recovery of the Christian sources of European unity, and in doing so, help give Europe a new birth of freedom. That was John Paul II’s vision, and I expect Benedict XVI shares it.

Poles who wish to meet Benedict XVI as he is should forget the conventional media categories: “conservative,” “traditionalist,” “doctrinaire.” These labels illuminate nothing and obscure a lot. Benedict XVI should be met as he is: a man of profound faith, penetrating intelligence, broad culture, and thorough going decency. He is coming to Poland to say “thank you,” and to summon Poland to its responsibilities. And that, too, is another way in which Benedict XVI is the worthy successor of John Paul II. 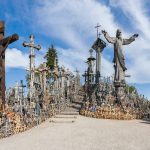