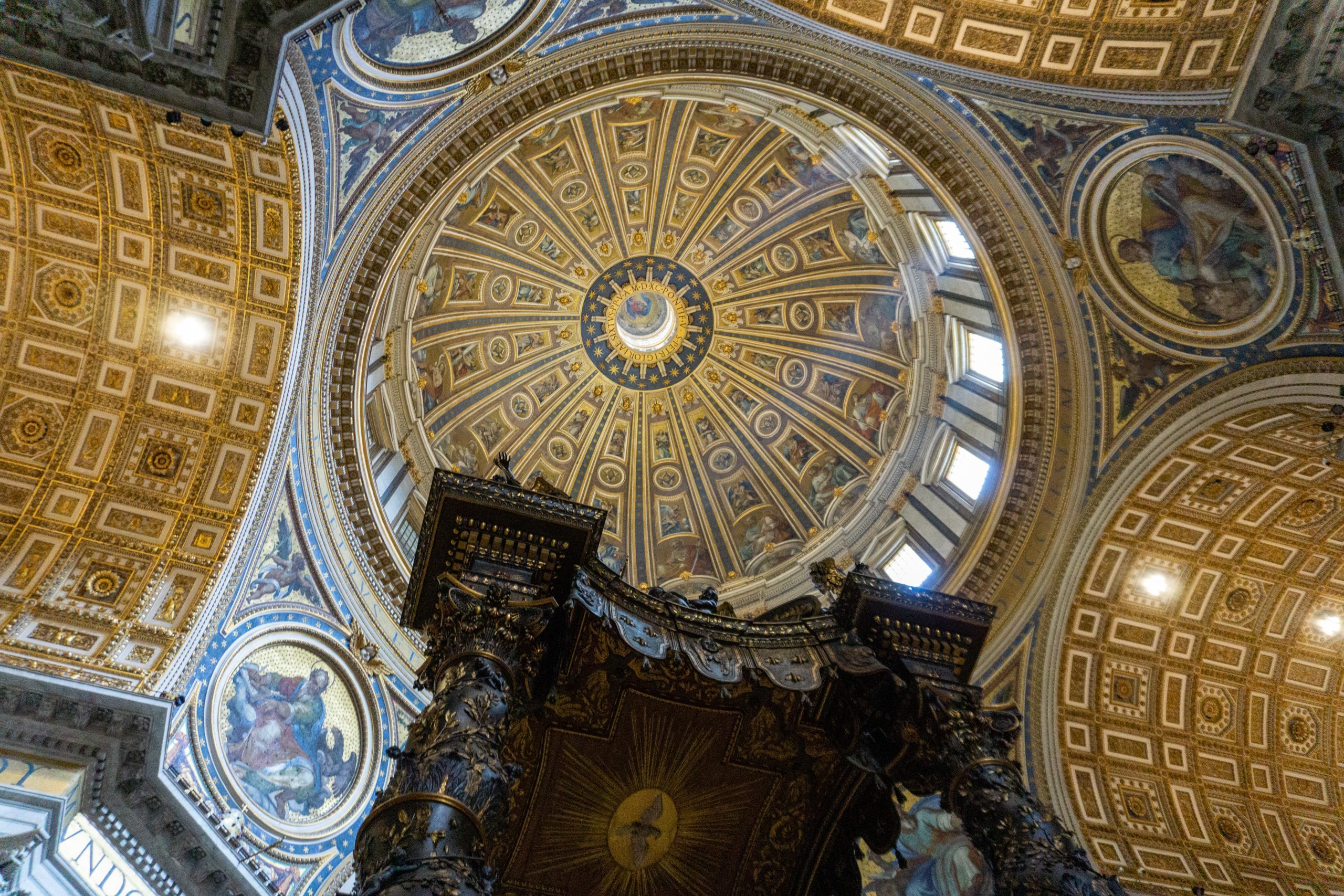 If you’ve not been in the Vatican basilica on February 22, the Feast of the Chair of St. Peter, by all means put that on your bucket list. Not only is February 22 the day when the statue of the Prince of the Apostles, with its famously worn-down bronze foot, is clothed in a splendid cope and crowned with a papal tiara, it’s also the only day on which the Altar of the Chair, the massive sculptural composition in the basilica’s apse, is ablaze with the light of over a hundred tapers. Better still is to get into the basilica as early as possible and watch the acrobatic Sanpietrini, the basilica’s maintenance staff, swinging from ropes and clambering about as they place and then light those six-foot-tall candles, which remain lit all day.

It took 124 years, from 1506–1626, to build “New St. Peter’s,” which replaced the fourth-century basilica with which the emperor Constantine enshrined the tomb of the first Bishop of Rome. When finished, “New St. Peter’s” was 730 feet long and 490 feet wide, its great dome soaring 448 feet above the floor. Taming this vast space with a coherent decorative scheme was one of the greatest challenges in the history of interior design. Happily, the man capable of executing such a daunting task was at hand. It took Gianlorenzo Bernini fifty-seven years to finish the job, and his extraordinary skill in doing so continues to delight the eye and lift the spirit three and a half centuries later. And no more so than on February 22, when the always-stunning Altar of the Chair is candlelit.

With her incomparable skill at explaining all things aesthetic, my friend Elizabeth Lev beautifully captured Bernini’s idea for the decoration of St. Peter’s apse in our book, Roman Pilgrimage: The Station Churches:

Bernini’s art aims to reveal the physical world and the divine milieu in collision: thus in the basilica’s apse, he created an experience of Pentecost. The oval window puncturing the masonry is filled with yellow glass, and as the sun sets, golden light pours in, just as the Holy Spirit penetrated the upper room. Its rays play off the gilt angels that cascade from the opening and billow into clouds around Peter’s throne: this enormous bronze chair, which . . . contains the shards of Peter’s Roman cathedra. Standing alongside the bronze throne, their robes seemingly rustled by the winds of the Holy Spirit, are Sts. Ambrose, Augustine, Athanasius, and John Chrysostom, who set the early Church ablaze with [their] zeal.

The positioning of these four great Doctors of the Church, two from the West and two from the East, makes an important theological statement. Each supports the colossal bronze reliquary that evokes the Chair of Peter and the doctrinal authority invested in the Church and its head—but that support is only the tip of a finger. Bernini’s point: While it may seem heavy and burdensome to an untutored eye or insufficiently converted soul, the truth of Catholic faith, of which Peter is the guardian, is actually quite light. Nor is that truth burdensome, for it liberates us in the deepest meaning of human freedom: Doctrine deepens our encounter with the incarnate Son of God, in whom we meet both the truth about the Father of Mercies and the truth about our humanity and its noble destiny.

Gianlorenzo Bernini’s convictions about the liberating character of truth were recapitulated by the Fathers of the Second Vatican Council in the Declaration on Religious Freedom. There, the bishops wrote that truth, including the truth about God and the truth about us, “can impose itself on the mind of man only in virtue of its own truth, which wins over the kind with both gentleness and power.” As the Church enters Lent 2022, it is well to reflect on and pray over this Catholic understanding that doctrine is light, powerful, and liberating, which some parts of the world Church seem to have forgotten—just as these confused brethren imagine that what the world thinks is true is superior to what the Church knows to be true on the basis of both revelation and reason.

Examining conscience on how well each of us has been the missionary disciple we were baptized to be over the past year, and then considering how we might be more fully conformed to that vocation in the future, are the two reflections to which Lent calls us annually. Like the Altar of the Chair, that reflection should lead to a new appreciation of the liberating lightness of doctrine.

PrevImpending Russian attack on the Cathedral of Holy Wisdom in Kyiv?
The Religious Roots of Ukrainian ResistanceNext

Cardinal Franciszek Macharski, Dead at 89, Was Bred to Heroism