Ernest Warren Lefever was a man of impressive accomplishment, much of which has been missed in the commentary immediately following his death on July 29, which tended to follow the conventional mainstream media scripts against which Ernie had battled for so many years.

It is no small thing to launch a think tank, fund it, bring it to maturity, and secure for it a position of influence in the intellectual, cultural, and political life of the nation; that is what Ernie Lefever did in founding the Ethics and Public Policy Center and then leading it until 1989. In doing so, he created Washington’s premier location for serious research and writing on, and debate about, the impact of religiously informed moral argument on American public life. Washington has many, many research institutes dedicated to shaping the public policy process; there is only one Ethics and Public Policy Center, where work on foreign and domestic policy issues is shaped by rigorous, theologically informed, and philosophically sophisticated reflection, conducted by an ecumenical and inter-religious staff of nationally and internationally recognized scholars and writers. In launching EPPC, Ernie Lefever brought the traditions of Christian realism he had learned from H. Richard and Reinhold Niebuhr to bear in Washington. That he succeeded in carving out a space for this kind of public policy argument is one of the reasons why the debate in the American capital is very different than the debate in London, Paris, Berlin, Moscow, or Beijing.

Ernest Lefever’s second signal accomplishment was to keep Washington aware of the moral squalor of the communist enterprise — a system of tyranny built on a culture of lies. This was not a popular theme in the late 1970s, when Americans were being counseled by their president to get over their “inordinate fear” of communism. Ernie knew better. Having seen the murderous effects of totalitarian brutality in Europe after World War II, he was one of those classic liberal internationalists who were determined that such atrocities should never happen again. The pacifist convictions of his youth had kept Ernie Lefever out of the armed forces during the Second World War; he was a soldier of freedom nonetheless, and suffered the criticism of less insightful (and, truth to tell, less honest) souls as a result.

Then there was Ernie’s rapid discovery of the importance of what was called, in its early days, the Religious New Right. Most of Washington regarded this phenomenon as an unwelcome intrusion from the fever swamps; once again, Ernie knew better, created a program at EPPC to help deepen American evangelicalism’s intellectual engagement with public policy issues, and had the satisfaction of seeing what had once seemed a brushfire rebellion turn into one of the most dynamic and influential forces in American public life.

And let’s not forget Ernie Lefever’s scholarship in unveiling the ideological perversion of the World Council of Churches by forces that had nothing to do with Christianity, but everything to do with the worst of global leftist moral posturing. Sooner than most, Ernie Lefever recognized that the days of the mainline Protestant hegemony in American life and in world Christianity were over — in no small part because of an ideological besottedness that emptied these once great denominations of Christian content. He described all that for what it was, and earned himself another brace of (the right) enemies in the process.

Often identified with the Reagan Revolution, Ernie Lefever was, like so many other Reaganauts, an old-fashioned liberal: an American patriot who believed in a color-blind society of equal opportunity at home, and who sought to defend freedom’s cause in the world. He brought to those tasks the intellectual conviction that Christian realism had much to contribute to the public debate over public policy. And that was the reason why he created Washington’s leading center for serious thought about religion and public life.

PrevBenedict XVI and the Truth About Charity
Freedom, Sanctity, and the FutureNext 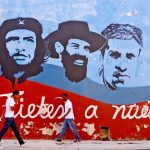