Some of the things the Republican leadership in Congress has to do are hard to get done by their very nature, and serious citizens understand that. Health-care reform is one obvious example. Immigration reform is another. But there are other things that Washington makes hard for itself — and absurdly expensive for the taxpayer — because relatively simple things are made hopelessly convoluted by stupidity, stubbornness, bad arguments, clientitis, attention deficits, and a shortage of leadership. One such thing is the Dwight D. Eisenhower Memorial. That noble idea has become an overpriced and ugly mess that threatens to further deface the National Mall, waste a lot of money, satisfy the ego of a celebrity architect who has compared President Trump to Hitler, and do scant honor to the memory of the victor of D-Day and the 34th president of the United States.

If the Republican congressional leadership wants to demonstrate that it can achieve something worthwhile, let it cut this Gordian knot, now.

Congress created the Eisenhower Memorial Commission 18 years ago, to oversee the creation of a memorial to President Eisenhower. Since then, the commission, while failing to raise a memorial to Ike, has wasted tens of millions of dollars and made itself into a monument of sorts: a case study in how not to get things done efficiently and in a way that enhances our national public life.

The commission, through the General Services Administration’s Public Buildings Service (which had little experience in such matters), conducted a deeply flawed and opaque competition for a memorial designer that from the beginning seemed biased in favor of hyper-modernist architect Frank Gehry, a longtime friend of the Commission chairman. After winning the competition (to which no one was required to submit actual plans), Gehry, who has thus far made more than $16 million out of the Eisenhower Memorial project, proposed a design featuring gargantuan metal scrims, which seemed more appropriate to Tiananmen Square than the Mall, and a statue of a boyish Ike gazing wistfully into the future. That design was ridiculed from sea to shining sea, leading one commentator in the not notably anti-modernist New Yorker to observe that “in true bipartisan spirit, almost everyone hates it,” while an oversight investigation by the House Natural Resources Committee called the entire project a “five-star folly” in which the GSA violated its own competition rules.

Gehry has subsequently tweaked his design, which now calls for a scrim, or metal “tapestry,” depicting the Normandy beaches at which Eisenhower launched what he termed a “great crusade”; no one has yet to ascertain why the proposed “tapestry” will conjure up D-Day rather than, say, the Outer Banks. The Gehry redesign retains, however, two gigantic and wholly unnecessary limestone pillars from the original proposal, and substitutes a kitschy statue of a teenage Ike for the previous boy: an orangutan-like figure, all arms and legs, who gazes dreamily toward statuary recollections of Eisenhower as Overlord commander and president. In sum, Gehry 2.0 is a dog’s breakfast taking up a vast amount of space in marked contrast to what Ike’s son, retired general John S. D. Eisenhower, said he preferred as more befitting his father’s identity and legacy: “an Eisenhower Square that is an open green space with a simple statue in the middle, and quotations from his most important sayings.” But John Eisenhower died in 2013, and Ike’s granddaughter Susan has switched sides, saying that the family approves the Gehry redesign.

But while the family has been used as a kind of trump card in this ongoing argument, its views are surely not determinative. Nor does the claim that the Eisenhower Memorial must be built immediately, because World War II veterans are still alive, make much sense. Were signers of the Declaration of Independence alive when the Jefferson Memorial was built? And what about the National World War II Memorial, which already exists, right in the middle of the Mall? The appeal to veterans’ sensibilities is another emotional gambit in a political game that has been far too often characterized by heat rather than light, and in any case mistakes the nature of civic memorials, which are intended to instruct and inspire future generations.

This nonsense has gone on long enough. The Republican leadership of the House and Senate should get engaged with the issue and resolve it. The first order of business is for Congress to refuse the waiver that will permit the Eisenhower Memorial Commission to break ground before the Memorial is fully funded.

Next, the commission should be reconstituted. A new commission would perhaps be best chaired by Bruce Cole, a former chairman of the National Endowment for the Humanities (and, full disclosure, my EPPC colleague). If selected, Cole, a current member of the commission and longtime critic of the Gehry designs who has scholarly expertise in the field of civic memorials, should be charged with leading an open and transparent competition aimed at soliciting designs that could be built at modest expense — not the $150 million the Gehry redesign would require, for which private funding has not been forthcoming, leaving the federal government to foot the entire bill. (It would be interesting to see current Republican proponents of building Gehry 2.0 explain such a large appropriation to their constituents, especially if those constituents understand that the National World War I Memorial now being built sought designs that could be built for $20–25 million).

And if the congressional leadership declines to get something eminently doable done, by stopping Gehry 2.0 once and for all and reconstituting the Eisenhower Commission so that it will produce an appropriate memorial, then it will be up to the White House, through the Interior Department and its authority to withhold construction permits, to step in and end this farce.

But it ought not come to that. This is a no-brainer. A Republican congressional leadership that badly needs a win demonstrating that things really have changed in Washington should see an opportunity for just that, right here.

— George Weigel is Distinguished Senior Fellow of the Ethics and Public Policy Center, where he holds the William E. Simon Chair in Catholic Studies.

This article was originally published on National Review Online
http://www.nationalreview.com/article/446398/eisenhower-memorial-commission-frank-gehry-design-bruce-cole-congress-interior-department

PrevA New Awakening
The Power of the CrossNext 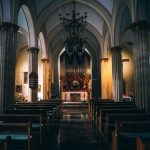