Criticism of the Obama administration’s handling of the current Libyan crisis, following hard on the heels of similar criticisms of its approach to the dramas of Tunisia and Egypt, has tended to focus on the president’s personality and his alleged incapacity for global leadership. There’s doubtless an element of truth in this, but the problem is likely far worse. The dithering, indecisiveness, feckless multilateralism, and lack of strategic vision that have been on sad display in recent weeks are the logical, if very dangerous, by-products of a cluster of ideas that have come to dominate the Democratic foreign-policy establishment.

Those ideas have a precise and definable origin: They first emerged when the New Left challenged the Truman/Acheson/Kennedy/(Scoop) Jackson Democratic consensus during the Vietnam War. In softer forms, they then became the new orthodoxy among Democratic foreign-policy mandarins like Cyrus Vance and Warren Christopher. Despite the fiascos to which these ideas led during the Carter and Clinton administrations (cf. the Iran hostage crisis and the American inability to prevent genocide in the Balkans), and despite the efforts of some in the old Democratic Leadership Council to change the intellectual template of Democratic foreign-policy thinking, these bad ideas have shown a remarkable resilience. They remain operative at all levels of the Obama foreign-policy team; they explain a great deal of what otherwise seems inexplicably stupid over the past several weeks; and they must be challenged by any 2012 Republican presidential candidate serious about American leadership in the world.

In briefest compass, eight ideas have shaped the foreign-policy perspective of today’s Democratic establishment. Different leaders will emphasize one or another of these ideas, and circumstances will dictate the ways in which these ideas are applied to real-world situations. However, anyone wanting to dig into the subsoil of the incompetence, ineptness, and just plain bad judgment currently on display had better be prepared to reckon with these eight ideas—and with the fact that people in power actually swear fealty to them.

1. Conflict is not the normal political phenomenon that it was assumed to be for millennia. Conflict is an aberration, and if there is conflict between nations or blocks of nations, or within nations, it must be because of some palpable injustice, the remedying of which will assuage the conflict in question and restore the natural order, which is peace. The idea that conflict results from the inevitable clash of interests and values in a plural world—which political thinkers from Augustine to Acheson assumed—is in fact not true. Moreover, the insights of psychology and psychiatry are of special utility in understanding the character of political conflict.

2. Peace is not a matter of a rightly ordered and law-governed political community; rather, “peace” is a state of mind that can be willed into being. The classic notion of the peace of order, which dominated Western thinking about the politics of nations from The City of God through the drafting of the Charter of the United Nations, is far too beholden to antediluvian ideas about the importance of power. There will be peace if all men learn to get along, and the redressing of what those who appear to be our foes deem to be their grievances will help hasten that day. In other words, peace is not a matter of the use of law and politics to resolve conflicts in an equitable way; peace is a matter of mutual understanding, to which structures of power are often an impediment.

3. The notion that the United States should actively seek to shape world politics is pernicious, not for the old isolationist reason that it’s bad for us, but because we tend to be bad for the world. Thus the United States should withdraw from the leadership role it has played in world affairs since 1941, scale down its military commitments, eventually end its work as global sheriff, and act as one among equals, not first among equals, in the affairs of nations. This will be good for the world, and it will keep in check that in-born American aggressiveness that led to debacles such as Vietnam.

4. The use of armed force is almost always a bad idea and reflects, not the intractability of certain situations to other forms of conflict-resolution, but a failure of imagination and will on the part of U.S. policymakers. Moreover, if a combination of pressures compels the occasional use of force, the prime strategic imperative is to devise an exit strategy that will end the use of force at the earliest possible moment. The notion of American forces permanently garrisoning certain strategically crucial locations, or maintaining freedom of the seas, is hopelessly antiquated and a likely cause of avoidable conflicts. If America eschewed the use of armed force save in extremis, others would do the same.

5. The present state system should be replaced by some form of international governance, in which multilateral and international bodies play the leading role. Rather than being guarantors of freedom and cultural continuity, nation-states, with their inherent aggressiveness, are a large part of the world’s problems. Whittling away the prerogatives of nation-states, to the point where the idea of state sovereignty eventually disappears, ought to be the long-term goal of U.S. foreign policy. In the meantime, every opportunity to seek multilateral solutions to immediate problems should be seized, and “unilateralism,” which simply reinforces the bad habits of the past, should be avoided at virtually all costs.

6. The primary responsibility of U.S. policymakers is to advance the construction of a multilaterally organized and run international order, not to defend and advance the interests of the United States. “National interest” is a morally dubious and strategically clumsy category for dealing with the world we live in. Identifying the interests of the United States and its fellow democracies with the good of the world (and the possible good of others) is even worse: an act of hubris that inevitably brings grief. The sooner American policymakers learn to “think globally,” the better the world will be. A happy by-product of this global-think will be a diminution of anti-Americanism around the world, which is primarily caused by our clumsiness and aggressiveness.

7. With the Cold War (which was in no small part Harry Truman’s fault) now over, there is no power, group of powers, or ideology that poses any grave threat to the United States. China’s ambitions are in its own neighborhood, as are those of Putin’s Russia, and neither country poses any serious threat to the world, or to a more equitable, peaceful world order. Jihadism, while problematic at this moment, will recede when an Israeli-Palestinian peace treaty brings a two-state solution along pre-1967 boundary lines to the Middle East; meanwhile, jihadism is best addressed through a combination of airport body-scanners and American assurances of respect for Islam, a felt lack of which is at the root of a great deal of jihadist anger.

8. We are not the indispensable nation. There is nothing morally or politically distinctive, much less special, about the American democratic experiment in ordered liberty. So there is no distinctively American approach to world politics, and the United States ought not seek any distinctive role in 21st-century world affairs. However electorally inept it may have been at the time, George McGovern’s 1972 call—”Come home, America”—was essentially correct. America does best for the world by scaling back its self-understanding, lowering its expectations, and thinking of itself as simply another country. Doing so will gain us respect, lower tensions, and make conflict less likely.

These are the ideas that, in one form or another, lurk just beneath the surface of the thinking of virtually the entire Democratic foreign-policy establishment. They shape the minds of the people who form the talent pool from which Democratic administrations draw their senior foreign-policy officials. No Democrat who strongly challenges these ideas has a chance of being the Democratic presidential nominee. Moreover, the people who hold these ideas are firmly convinced that they are true.

That, and not some psychological tic of President Obama’s, is why U.S. policy has been what it has been since a Tunisian fruit vendor immolated himself and set North Africa and the Middle East ablaze. Ideas do indeed have consequences, for good and for ill.

This article was originally published on National Review Online
http://www.nationalreview.com/articles/263126/how-democrats-view-world-george-weigel

PrevCardinal Baum: A New Record-Holder
The Church and the UnionsNext

A Campaign of Narratives

Christmas and a World Upside-Down 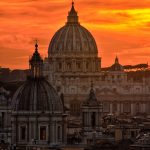