George Weigel is one of the foremost American Catholic thinkers involved in the current debate on the Catholic just war tradition and modern warfare.

Weigel was one of the featured speakers and organizers of a conference last month on “Catholic Thought and World Politics in the 21st Century,” at the Gregorian University.

I asked Weigel to expound on some of the arguments he raised at the conference, particularly concerning the Church’s position on just war, the role of the United Nations and the Holy See’s current position on armed intervention.

How did the idea for the conference evolve?

In the late spring of 2003, Archbishop Celestino Migliore, the Holy See’s representative at the United Nations, and I began to talk about certain problems in the state of Catholic thinking about world politics.

Both of us were concerned about the condition of what used to be called “Catholic international relations theory,” and we agreed that a series of programs in Rome that would put European scholars, American scholars and Vatican officials into conversation on the future of Catholic thought about world politics would be in everyone’s interest.

The April 2004 conference was, we hope, the beginning of a multiyear process that will lead to a clarification of thought for all who are involved.

So, at the beginning of the process, it seemed best to focus on some very basic questions: the very idea of “Catholic international relations theory”; the current state of the just war debate in the Church; and the nature, prospects and limits of international law.

In your talk, you touch on the difficulties of the role of the United Nations, an organization which in some instances is at odds with the teaching of the Catholic Church, yet one which the Holy See nonetheless says should have decision-making authority on matters such as war. How does one reconcile sovereignty of states with participation in an international organization? Do you think that sovereign states can act to secure peace without assistance or agreement from an international organization; and perhaps that such an organization may not have any significant role to play in securing world peace? Is there an alternative to the U.N.?

These are some of the most urgent questions requiring careful thought today. They often come down to the question, What is the locus of moral authority in world politics at the beginning of the 21st century?

Since the modern notion of state sovereignty emerged in the 17th century, the Catholic Church has cautioned, rightly, against absolutizing this idea. The 20th-century popes, in continuity with this concern, were strong advocates of international organizations, with Pope John XXIII proposing a “universal public authority” to handle those global questions that could only be handled at the global level.

At the same time, Blessed John XXIII made clear that he was not supporting “world government,” or international structures that would impinge on the legitimate prerogatives of national governments or local governments.

So, from a Catholic point of view, this is a both/and, not either/or, matter. Both the U.N. and sovereign states are facts of international public life, and Catholic international relations theory has to take account of both.

On the question of the U.N.’s authority, and as I indicated in my paper at the April conference, it would be hard to say that, as a matter of fact, the world’s nations have agreed that the only entity that can authorize the use of armed force is the U.N.

Here is what I wrote: “Since 1945, 126 out of 189 U.N. member states have been involved in 291 armed conflicts in which some 22 million people have been killed. Given this record, it is difficult to argue that the ‘international community’ has agreed in practice to be bound by the U.N. Charter and its rules on the use of force. It is even more difficult to argue that the ‘international community’ has ceded an effective monopoly on the use of force to actions sanctioned by the Security Council. Perhaps it should; perhaps it someday will. But to assert as a matter of fact that this transfer of authority has taken place seems counterfactual today.”

That’s one dimension of our current situation. On the other hand, the nations of the world are obliged, morally, to build a world of “order,” which is Augustine’s understanding of the meaning of “peace,” and that has to be done, politically at least, through transnational and international organizations.

Work to reform the U.N. system is thus a moral and political imperative. But while that work goes on, it doesn’t make much sense to me, from a moral-theological or political point of view, to ascribe to the U.N. capacities it doesn’t have and a moral authority it has rarely demonstrated in practice.

But those who use that phrase today often mean much more. They mean that the use of proportionate and discriminate armed force is always morally suspect, and this has not been the stance of the Catholic just war tradition for 1,500 years.

The classic tradition believed that the morality of the use of armed force depended on who was using it, why, to what ends, and how. Thus the classic just war tradition begins with a presumption in favor of justice: legitimate sovereign authority has the moral obligations to defend those for whom the public authorities have assumed responsibility.

There are many ways to fulfill that obligation; in certain circumstances, proportionate and discriminate armed force can be one of those ways.

If you begin your analysis this way, with the responsibility of sovereign authority to advance the peace of order, you can bring the full riches of the tradition to bear on the situation; if you begin somewhere else, you can get confused. And your vision can become blurred.

Similarly, you question whether the Holy See’s position on war isn’t a type of “functional pacifism — a way of thinking that retains the intellectual apparatus of the just war tradition of moral reasoning but that always comes down, at the bottom line, in opposition to the use of armed force.” If the Vatican’s line on war were to be a type of functional pacifism, could that be accepted as a legitimate development in Church teaching or would it be an error, in your opinion?

We have to distinguish here between the moral teaching of the Catholic Church and the diplomacy of the Holy See, acting as an extension of the global mission of the Bishop of Rome, the Pope.

The moral teaching of the Church is aptly summarized in the Catechism, which I do not believe can be read as endorsing what I termed in my Rome paper “functional pacifism.”

As for the diplomacy of the Holy See, it seems to me that the Holy See should constantly press for non-military solutions to conflicts.

It would be inappropriate for the Vatican’s secretary for relations with states — the “foreign minister” — or officials like the president of the Pontifical Council for Justice and Peace to announce, publicly, and in so many words, “These are the good guys, these are the bad guys; good guys, go to it, and God bless you.” The diplomats of the Holy See should press for non-military solutions; that’s their job.

Similarly, the moral witness of John Paul II has been directed, appropriately, toward pressing the nations to resolve their conflicts without violence. We can be sure that future popes will do the same thing.

That witness and that diplomacy should be conducted in such a way that it does not suggest that the Church has, as a matter of moral principle, adopted a stance of “functional pacifism,” which it has not.

How to do that is a delicate matter that requires, among other things, careful coordination of statements from all the organs of the Holy See. It also requires a measure of self-discipline on the part of senior churchmen in Rome.

American and other reporters falsely assume that every senior official of the Holy See speaks “for the Vatican.” They don’t. In this kind of media environment, senior churchmen have to be very careful to let the Holy See speak in its own voice, through its own appropriate organs.

All of these questions, which touch on the meaning of the rich, complex just war tradition for today, will be among the issues discussed as the process I began discussing with Archbishop Migliore a year ago unfolds.

You say, “Catholics whose countries experience a particular burden of responsibility in world affairs and who understand the distinctive way that Catholic social ethics once thought about the moral dimensions of world politics, ought to play a significant role in the Roman conversation and might well be consulted more regularly by the appropriate dicasteries of the Roman Curia.” I assume here that you refer to Americans Catholics, at least as one of the major groups, and ask why, if they make up only 6% of worldwide Catholics, should they be given a majority voice in Rome?

No one is asking for a “majority voice.” As Archbishop Migliore and I both recognized, there is considerable expertise in the relevant disciplines — just war theology, international legal theory, human rights theory, etc. — in the United States.

Those specialists should be in more regular conversation with European intellectual colleagues, with the Roman intellectual milieu, and with the appropriate offices of the Holy See. Everyone will benefit from such a conversation, in both directions across the Atlantic.

This article was originally published on Zenit.org
http://Zenit.org

PrevDealing with DaVinci
A patron saint for lifeNext 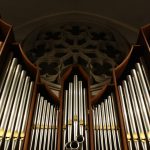