From Rottweiler to Dunce?

A few days after the election of Pope Benedict XVI, some friends and I gathered for a celebratory dinner at Rome’s Taverna Giulia — a favorite haunt of journalists, due in part to the fact that it serves the best lasagnette col pesto on the planet.

I arrived a bit early and, as I walked through the restaurant, I spied the leadership of the National Catholic Reporter, including publisher Sister Rita Larivee, editor Tom Roberts, and the NCR‘s ace Vatican reporter, John Allen, with whom I had been swapping stories and rumors for years. Being in a somewhat ebullient mood, I went over to the NCR table and invited them to “join the victory party” upstairs.

They had the good taste to laugh, although it was clear that some of their company were not altogether thrilled by the conclave’s outcome. Would a papal bull condemning the NCR and all its works soon be forthcoming from the Apostolic Palace?

I doubt that my NCR friends imagined that, a mere 16 months later, they would run an editorial positively chortling over what they assumed to be my discomfiture, and that of my colleagues among the dread neocons/theocons, over the course of the pontificate to date. There was, of course, no more evidence for this than there was for latent fears, on that lovely Roman evening in April 2005, of a new Benedictine inquisition. But, then, journalism is not an exact science, and editorializing is the least exact part of journalism.

Further evidence of which was provided by yet another NCR editorial, in the paper’s October 13 issue, which seemed to argue that the man so many on the Catholic Left had long taken to be “God’s Rottweiler” had suddenly become God’s Dunce.

In his recent Regensburg lecture, the editorial suggested, Pope Benedict XVI may have trafficked a bit “too much in theological abstraction,” while failing to weigh sufficiently “the complicated historical, political, and social factors” bearing on the Islamic world’s (admittedly “dismal”) record on religious freedom. “Focusing exclusively on theological difference between Christianity and Islam — whether real or imagined — therefore runs the risk of oversimplifying a complex situation,” the editors warned.

So what should Benedict XVI do? Appoint a group of retired and semi-retired cardinals — men who “understand the complex argot of politics and international diplomacy” — as roving ambassadors to the worlds within worlds of Islam.

Which would seem to suggest that the 264th successor to St. Peter doesn’t know how to talk the talk, much less walk the walk. From Rottweiler to dunce in two months: fast work, indeed.

And completely preposterous. In the weeks immediately following the Regensburg lecture, Iranian television described Pirates of the Caribbean — Dead Man’s Chest as a tool of the “Zionist lobby” and “capitalist weapons companies,” and informed its audience that Pepsi is a devious acronym standing for “Pay Each Penny Save Israel.” At about the same time, the interior minister of Saudi Arabia, Prince Nayef bin Abd Al-‘Aziz, urged an audience to “cut off the tongues” of the “transgressors,” i.e., Muslims “who are trying to distort Islam with their claims of reform and their corrupt progress.” In the same speech, broadcast on Al-Majd TV, Prince Nayef also claimed that Osama bin Laden is “an agent of foreign intelligence agencies.”

What, do you suppose, will a roving band of aged cardinals sent on what the NCR proposes as a “listening tour” of Muslim states learn from all that — or from Iranian president Ahmadinejad’s claim that Iran today is “a perfect model of splendid, humane, and divine life”?

At Regensburg, Pope Benedict XVI did the world an immense service by giving believers and non-believers alike a language with which to deal with the threat of jihadist ideology: the language of rationality and irrationality. Far from being an exercise in “theological abstraction,” the Holy Father’s Regensburg lecture was a courageous attempt to create a new public grammar capable of disciplining and directing the world’s discussion of what is arguably the world’s gravest problem.

It’s a shame the NCR missed that. Let’s hope the Congress we elect next week doesn’t. 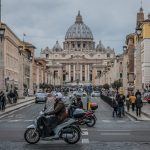