Freed to Be Images of God

Four distinguished American theologians have died since the beginning of Advent: Avery Cardinal Dulles, Father Richard John Neuhaus, Msgr. William B. Smith and Jesuit Father Francis Canavan. Each of these men enriched both Church and country with a noble idea of freedom. That idea has much to do with the events of salvation history we recall at this sacred season.

After receiving his vocation from God, Moses tried to tell the Israelites the good news of their impending liberation: they would be freed from the power of the Egyptians and brought into the land that God had given to Abraham, Isaac, Jacob and their offspring. It sounds like a very good deal: Israel comes into the possession of its ancestral land; Israel is brought into communion with God, who is truly the Lord.

But Israel isn’t buying: “Moses spoke thus to the people of Israel; but they did not listen to Moses, because of their broken spirit and their cruel bondage” (Exodus 6: 9). After centuries of slavery, Israel could not imagine itself free. Israel had lost the image of God within itself.

As Dominican Father Dominique Barthelemy puts it in a wonderful book, God and His Image (Ignatius Press), mankind after the Fall had “become wild; (man) flies in terror toward death, in terror because he can no longer bear the gaze of the Father, whose love he has in fact disowned and flouted.”

Israel, trapped in the bondage of Egypt, had forgotten the loving gaze of the Father who had called Abraham and spared Isaac. So Israel would have to be tamed anew; Israel could only recover the truth about its freedom by casting off the bad habits of slavery.

“Jacob’s descendants in Egypt are a people in winter,” Father Barthelemy writes, “a people ready to die, who see death staring them in the face. God will be able to tame a people in conditions like these. It is not immediately that he will be able to take them by the hand on Sinai. He must begin by saving them from death in a wholly unexpected manner — hence the exodus from Egypt…. He will not expect this people to start calling him God, a name that evokes terrifying almighty power, immediately. He asks them to call him … Yahweh, which for Israel means ‘Savior’ ….

“And Israel will grasp the hand of this Savior as their guide, since it is he who has saved them from death. Afterward, they will allow this saving hand to fashion them anew. It is very necessary that God should fashion man once more in his own divine image. For man was made in the image of God. But this same man has fled … and has fashioned in himself a caricature of God’s image. God cannot therefore make himself recognized by man unless he first fashions in him (once again) the true image of God ….”

God begins the definitive work of refashioning his image in us in the Exodus. He completes that work in raising Jesus, Son of God and Son of Mary, from the dead, so that Jesus the Christ might be the first of many brothers — brothers who live true freedom in the communion of the Church, which is the Son’s mystical body, extended in time and space.

This is the truth about freedom that Cardinal Dulles, Father Neuhaus, Msgr. Smith and Father Canavan tried to teach us: that true freedom consists in looking up, not looking down — in casting off our broken spirit and living according to the image of God within us. That is the truth of both Exodus and Easter. We learn it crossing the Red Seas of our own life-journeys, where we meet the Risen Lord. 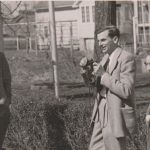 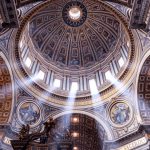