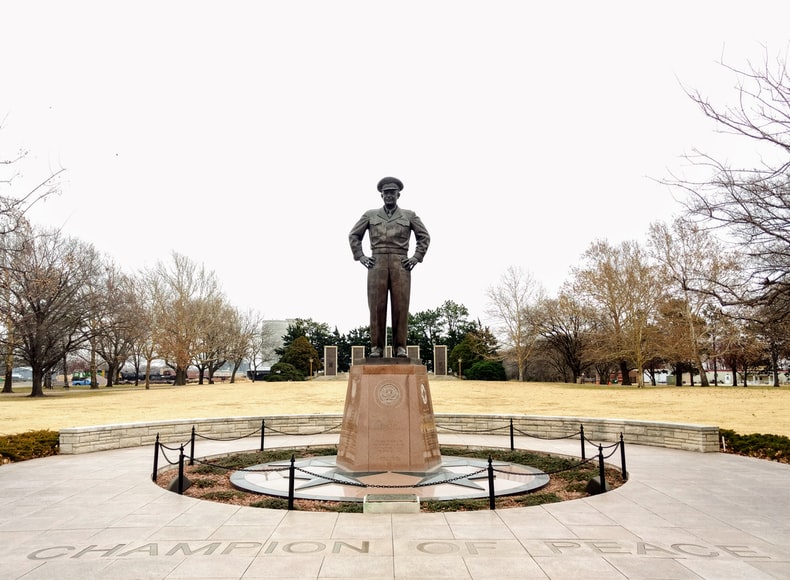 With a gracious assist from former Kansas governor Sam Brownback, I had the privilege of a personal tour of the Dwight D. Eisenhower Presidential Museum in Abilene this past March. And I couldn’t have had a better guide: Mary Jean Eisenhower, the 34th president’s charming granddaughter, with whom I shared lunch in a roadside restaurant evidently much favored by the locals—the parking lot was jam-packed before noon. After a getting-to-know-you hour over heartland victuals, Mary Jean and I were off to the museum and the memorial chapel where Ike, Mamie Eisenhower, and their son Icky, who died of scarlet fever before his fourth birthday, are buried; the boy’s death, his father later wrote in At Ease: Stories I Tell to Friends, was “the greatest disappointment and disaster of my life.”

The museum is very well done and includes some striking memorabilia, including the table at which Ike, surrounded by British and American colleagues, took the hard decision to launch the invasion of Europe on June 6, 1944, a day after having canceled the assault because of weather. After making that gut-wrenching call, General Eisenhower went to visit the paratroopers of the 101st Airborne Division, hours before they were to drop into the dark, flak-ridden skies over Normandy. British Air Marshal Sir Trafford Leigh-Mallory had tried to talk Ike out of the airborne attack, claiming it would result in horrendous casualties—perhaps 80 percent of the men would be lost, he warned. Eisenhower, who knew that the paratroops were essential in securing the causeways out of the invasion zones if the Allies weren’t going to be trapped on the Normandy beaches, rejected Leigh-Mallory’s doomsday warning. Before they took off, however, he wanted to be with those he was sending in harm’s way. That determination led to one of World War II’s most famous photographs (later depicted on a U.S. postage stamp), now displayed in a large format in the museum.

Eisenhower was possessed of a remarkable, disarming smile, a reflection of the man’s transparent decency; an early D-Day planner, Lieutenant General Sir Frederick Morgan, once claimed that Ike’s grin was “worth an army corps in any campaign.” In the photo in question, however, the famous Eisenhower smile was not to be seen. Rather, surrounded by men of the 101st, the supreme commander of the Allied Expeditionary Force is looking grave indeed, his right arm raised in what seems to be a Patton-like gesture of bold, even fierce, encouragement. Lieutenant Wallace Strobel, his face blackened with burnt-cork camouflage, looks just as serious as the general addressing him.

What was Ike saying, people have wondered for decades? What do you say to men about to jump out of C-47s into the fiery cauldron of war? Mary Jean Eisenhower got an unexpected answer on meeting Strobel at the christening of the USS Dwight D. Eisenhower. When she asked the now-elderly veteran what her grandfather had said to him, Strobel said that Ike had begun by asking where he was from; “Saginaw, Michigan, sir.” “How’s the fishing up there?” asked the supreme commander. Then the four-star angler proceeded to demonstrate his technique—and the photographer caught him with that determined look as with his right arm he showed the young paratrooper how to fly-cast the Eisenhower Way.

Is it any wonder that so many esteemed him?

Dwight David Eisenhower was at the roiling center of world affairs for twenty-plus years, longer than many of the other great figures of the twentieth century. As commander of the invasions of North Africa, Sicily, and Normandy, as president of Columbia University, as the first commander in chief of NATO, and in two terms as president of the United States, Eisenhower embodied the public servant who asks to be judged by results, not by snap, crackle, and pop. Ike did not think of politics as performance art, and he brought to his public service the willingness to take responsibility for his decisions that he had displayed the night before D-Day. Then, he not only met his men and encouraged them by being utterly normal as well as bracingly confident; he had also drafted a communique to be issued in case the invasion failed, in which he laid any blame on himself, not his troops.

If you can imagine Donald Trump or Joe Biden doing any such thing, your imagination is greater than mine.

Character is the basis of all leadership. The man demonstrating fly-casting the evening before D-Day was a man of character. We could use more of his kind today. 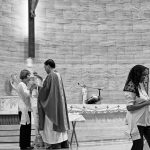