I first noticed the new slavery on the outskirts of Rome. There, along the back roads of the periferia, you could see today’s slaves: African women, mostly, with a scattering of eastern Europeans, standing along the roadside or hanging out near construction sites. Nearby, usually sitting in a car, was the overseer – or, to get down to cases, the pimp. But whether you call them “prostitutes” or use the Orwellian euphemism, “sex workers,” these women are victims of the 21st century’s version of the slave-trade: trafficking in persons.

It’s a tawdry, multi-billion dollar industry, this human trafficking, and it involves a Dickensian catalogue of horrors from kidnapping and bribery to AIDS and torture and murder. The man appointed to combat it on behalf of the U.S. government is an old friend, Ambassador John Miller. John has done a lot in his life: he’s been a successful lawyer and investor; he served on the Seattle City Council and was elected four times to the U.S. House of Representatives; he was even a baseball writer for the Seattle Weekly in the summer of 1982, when he shared a byline with…me. But over forty years of an active public life, John Miller has never found anything that so roused his passion as his present job: director of the State Department’s Office to Monitor and Combat Trafficking in Persons.

The office was something of a bureaucratic backwater when Miller took over three years ago. No more. Now the office’s annual report, mandated by the 2000 Trafficking Victims Protection Act, names names, and in ways that illustrate the magnitude of the problem. Take, for example, the June 2005 entry on Nigeria:

“The Government of Nigeria does not fully comply with the minimum standards for the elimination of trafficking; however, it is making significant efforts to do so…Although the National Agency for the Prohibition of Trafficking in Persons began investigating a number of law enforcement officials suspected of trafficking complicity over the last year, no prosecutions were initiated…”

To his astonishment (and anger) Miller has found that many government officials around the world – and not only in the Third World – can’t be bothered with combating trafficking: either because their laws permit prostitution, or because the victims are essentially voiceless, or because they’ve been cut into the profits. Miller has also had serious difficulties with the U.N., whose “peacekeepers” have been guilty of sex abuse crimes against refugees, including minors, in the Congo. Yet John Miller refuses to accept the cynical view that this shameful exploitation of human beings is so woven into the fabric of various societies that it can never be eradicated: “I once looked into the face of a girl who was rescued. Do I tell her that her other life wasn’t bad?”

Miller has seen things he once wouldn’t have believed possible; as he explained to the Seattle Times, “girls and boys are in demand in India because brothel owners want disease-free workers [sic] for their clients.” And he’s had fights with people who ought to know better, including American foundation executives who can’t understand that making money available to “sex-worker associations” for AIDS-prevention programs strengthens the hands of pimps and madams who prey on children. Ideologues have even accused Miller (who’s Jewish) of being a front for a Bush administration attempt to “impose” a “Christian agenda” on the world.

John Miller, however, thinks he’s working on the great human rights issue of our time. He’s right. The nation, and a lot of suffering people, are in his debt. 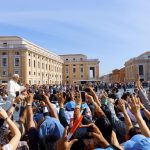