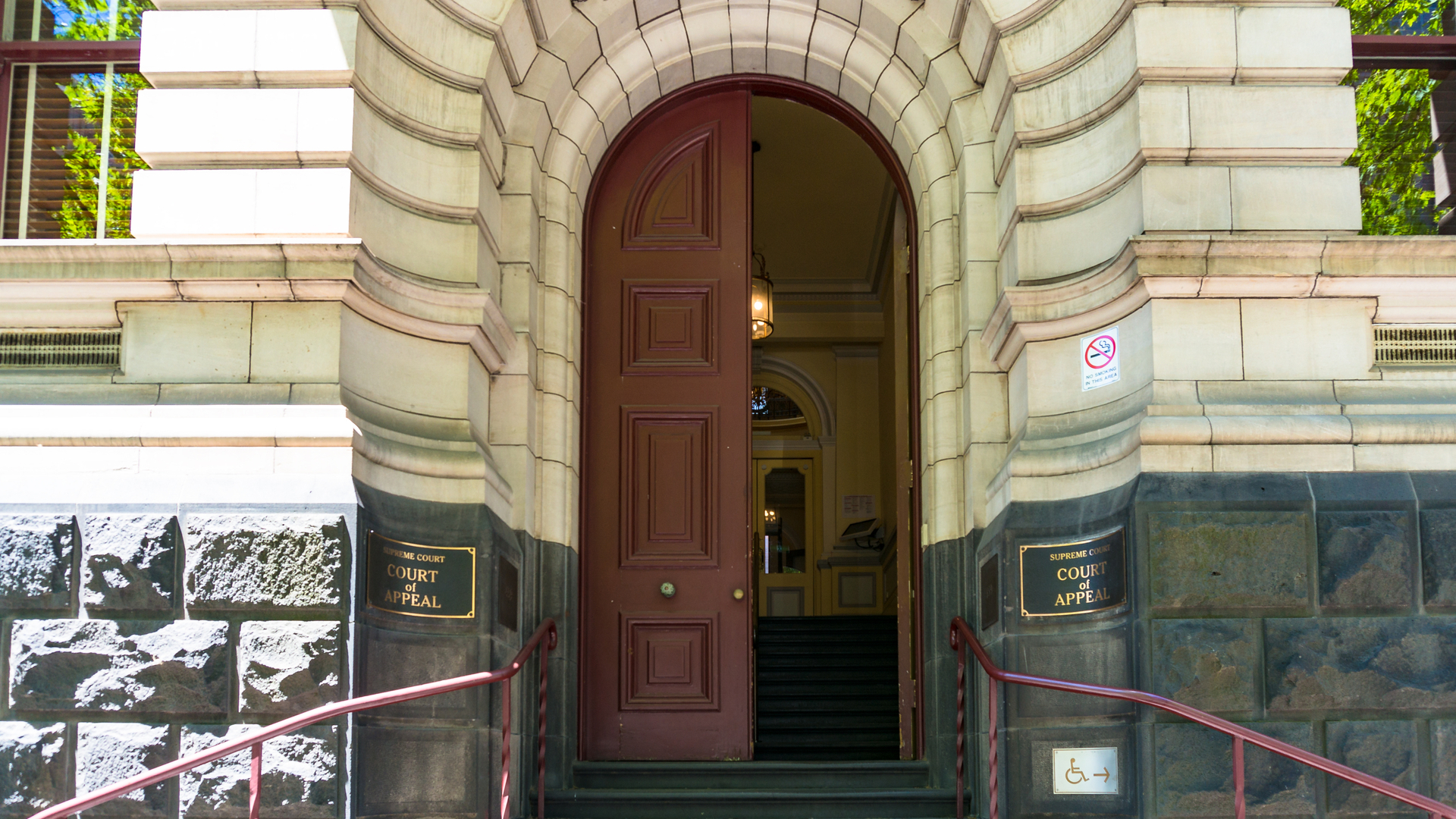 Was it mere coincidence, or perhaps Providence, that Catholics around the world read Psalm 94 at Midday Prayer on August 21, hours after an appellate panel of three judges announced a 2-1 decisionrejecting Cardinal George Pell’s appeal of his conviction on charges of “historic sexual abuse”? For there, the Psalmist laments legal perversity in a query to God that certainly must have struck some as resembling what had just happened in Melbourne at the Supreme Court of the state of Victoria:

Can judges who do evil be your friends?
They do injustice under cover of law;
They attack the life of the just
And condemn innocent blood.

To note this striking parallelism of legal and liturgical timing is not to suggest that any of the judges on the appellate panel are evil people. But two of them, Chief Justice Anne Ferguson and Judge Chris Maxwell, manifestly did something unjust under cover of law, in denying Cardinal Pell’s appeal and failing to acquit him of charges that had been shown on numerous occasions to be beyond the realm of plausibility. And the most devastating criticism to that effect was leveled, not by friends of the cardinal or fellow-Catholics, but by Judge Mark Weinberg, whose dissent from the opinion of his two colleagues on the appellate panel shredded their claims and logic in such a decisive way as to set up what one must hope will be a successful appeal to the High Court of Australia, the final legal arbiter.

Judge Weinberg is recognized by knowledgeable students of the Australian justice system as the premier criminal-law jurist in the country. His brilliant, two-hundred page dissent should be read in full, but here are several crucial citations:

On the utter implausibility of the complainant’s description of the alleged abuse: “…the complainant’s account….seems to me to take brazenness to new heights, the like of which I have never seen…I would have thought that any prosecutor would be wary of bringing a charge of his gravity against anyone, based upon the implausible notion that a sexual assault of this kind would take place in public, and in the presence of numerous potential witnesses. Had the incident occurred in the way that the complainant alleged, it seems to me highly unlikely that none of those many persons present would have seen what was happening, or reported it in some way.”

Therefore: “To my mind, there is a ‘significant possibility’ that the applicant in this case [Cardinal Pell] may not have committed these offenses.” Which was, on my reading of it, Judge Weinberg’s way of saying that the convicting jury erred grievously in meeting the established legal standard of guilt being proved beyond a reasonable doubt, and therefore the guilty verdict should have been vacated by the appellate court and the cardinal acquitted.

A Question of Presumptions?

Let us stipulate, as the lawyers say, that Chief Justice Ferguson, Judge Maxwell, and Judge Weinberg are all intelligent people. How is it, then, that two of them can look at the same sequence of events as Judge Weinberg – then-Archbishop Pell bolts from a procession at the end of High Mass in the Melbourne cathedral, escapes the notice of the other clergy in the procession, culls out two choir boys, sexually abuses them in six or eight minutes while fully vested, and then returns to the front of the cathedral to greet worshippers, all of which escapes the notice of anyone else and about which nothing is said for two decades – and come to such a radically different conclusion than that reached by Australia’s pre-eminent authority in criminal jurisprudence?

The first is that the charge of sexual abuse, however prima facie implausible, now trumps the traditional legal standard in the Anglosphere that innocence is presumed until guilt is proven beyond a reasonable doubt. A close reading of the majority opinion supports the fear that this standard was effectively reversed in Cardinal Pell’s case, such that the onus was on him to prove his innocence. In the summary of the majority opinion she read from the bench, Chief Justice Ferguson insisted that the complainant who made the charges against the cardinal was a credible witness who seemed not to be lying.

But what, one wants to ask, about the many witnesses for the defense, who insisted that not only were the charges false but that such things simply could not have happened under the circumstances described? Chief Justice Ferguson nodded to their testimony, but the majority opinion makes clear that, in classic Orwellian fashion, some witnesses were more equal than others. This is perverse. Yet it fit neatly with attempts to get the cardinal’s liturgical master of ceremonies to state that it was theoretically possible that, on occasion, he might not have been right next to Pell before, during, and after Mass, decades ago. That theoretical possibility was conceded as purely theoretical, but the m.c. insisted that he had no positive recollection of its ever being the case and that his disappearance from the archbishop-celebrant’s side was very, very unlikely. Yet it now seems from the majority opinion that a theoretical possibility was turned into positive evidence of Cardinal Pell’s guilt, despite what Judge Weinberg noted were the “discrepancies….inconsistencies…and [lack of] probative value” in the complainant’s testimony.”

The second, and not necessarily unrelated, possibility is that Chief Justice Ferguson and Judge Maxwell were influenced in their reading of the evidence – or, in this case, lack thereof – by the assumption, widespread in the Australian media, that any Catholic cleric charged with sexual abuse, if not overtly presumed guilty, should at least be treated as such. That perversion of the common law tradition may be based on anti-Catholic bias (as it surely is among such horrors as Australian television talking-head Louise Milligan, author of a libelous book about George Pell). Or it may be based on a genuine revulsion at ecclesiastical cover-ups of sexual abuse and the fear that, if one prominent cleric “gets away with it,’ others may get away with it down the line. But whatever its roots, this presumption-of-guilt against a class of individuals has far more in common with Stalin’s persecution of the Kulaks and his other class and political enemies than it has with any recognizable notion of justice in the English-speaking world.

This second possibility is amplified by the utterly toxic public and media environment that has surrounded George Pell in Australia for decades. Americans and other Anglophones with no direct experience of this cannot really grasp how poisonous the atmosphere has been, for there is no analogue to it anywhere else in the Anglosphere. Moreover, this lethal toxicity is not a by-product of the free-for-all that is the Internet and the blogosphere, but antedates the Web and social media by decades. And it is prevalent, not just on the fringes, but at the very epicenters of Australian journalism and commentary. The suggestion implicit in the majority decision rejecting Cardinal Pell’s appeal – that this atmosphere had no discernible effect on the jury that found the cardinal guilty – beggars the imagination: not least because the trial in which Pell was convicted by a 12-0 jury ballot followed a first trial that ended with a hung jury that voted 10-2 for acquittal.

All of which suggests the strong possibility that Chief Justice Ferguson and Judge Maxwell read the situation far differently than their more distinguished colleague in criminal law, Judge Weinberg, because of distortions in the lenses by which they were reading. And those distortions produced a grave reversal of both the presumption of innocence that is the foundation of criminal law in the Anglosphere, even as they obviated the requirement that the burden of proof rests on the prosecution to persuade jurors beyond a reasonable doubt.

This story is not over, by any manner of means. And as the story continues – with further investigation of the credibility of the complainant, further inquiry into the Victoria police fishing expedition against Pell that began two years before a complainant was found, and further consideration of Judge Weinberg’s devastating critique of his colleagues’ rejection of the cardinal’s appeal – it seems to me that, with a potential judgment on all this by the High Court of Australia looming on the horizon, friends of justice in Australia must now come forward with an unambiguous statement of what has long seemed obvious to many others around the world, but which has rarely been said by political, legal, and Catholic leaders Down Under: George Pell is an innocent man who was falsely accused and has been unjustly convicted of crimes he did not commit. It is not George Pell who is in the dock, now, but the administration of justice in Australia. And the only way to restore justice is for Cardinal Pell to be vindicated by the highest court in the land.

This simple but entirely defensible statement should be repeated, again and again, by responsible leaders in every professional field in Australia, and indeed by anyone and everyone Down Under who is willing to stand for the truth.

To repeat an image I have used before: this is Australia’s Dreyfus Case, and if Australia cannot find it within itself to vindicate justice by acquitting George Pell, then 21st-century Australia will find itself condemned by history to that ignominy in which the biased and mad persecutors of Alfred Dreyfus in the nineteenth century—bigots and hysterics who are global symbols of justice scored and trampled upon – now find themselves.

George Weigel is Distinguished Senior Fellow of Washington’s Ethics and Public Policy Center, where he holds the William E. Simon Chair in Catholic Studies. He is the author of over twenty books, including Witness to Hope: The Biography of John Paul II (1999), The End and the Beginning: John Paul II—The Victory of Freedom, the Last Years, the Legacy (2010), and The Fragility of Order: Catholic Reflections on Turbulent Times (Ignatius Press, 2018). His new book The Irony of Modern Catholic History: How the Church Rediscovered Itself and Challenged the Modern World to Reform will be published by Basic Books on September 17.

This article was originally published on The Catholic World Report
https://www.catholicworldreport.com/2019/08/22/falsely-matilda/