It was a very peculiar place in which to find one of the world’s most distinguished philosophers: the hard-currency bar of the Hotel Europa in Moscow, a basement dive full of cigarette smoke, appalling rock music, and East German women practicing the world’s oldest profession. Still, when someone mentions the great Polish thinker Leszek Kolakowski, that dump is the first place that comes to mind. The second is an encampment of homeless Russians at the edge of Red Square, near the multicolored onion domes of St. Basil’s Cathedral.

In October 1990, in company with a half-dozen academics and several colleagues from Washington think-tanks, I spent a week in Moscow in intense discussions with men and women who described themselves as the “democratic opposition” to Soviet leader Mikhail Gorbachev — whom none of them regarded as a democrat. We were fomenting revolution, if of a nonviolent sort, and the days were filled with bad meals, seedy spooks in the hotel lobby, and fascinating arguments about the building-blocks of the free society. On checking into the Europa, it was clear even to amateurs that our rooms were bugged, so we had to find a secure place to meet in the evening, debrief, and plan the next day’s discussions. The hotel’s hard-currency bar (entrance to which required dollars or deutschmarks) was a convenient spot where the decibel-level was so awful that even an artful KGB bug-artist couldn’t figure out what we were discussing.

So there we met, night after night, as the venerable Dr. Kolakowski — author of one of the 20th century’s magisterial works, the three-volume Main Currents of Marxism — dispensed wisdom while sipping cherry brandies and politely batting away aggressive frauleins trying to plant themselves on his lap. As remarkable as those memories are, however, walking with Leszek through the wretched tent-city that homeless Russians from the provinces had erected just outside  Red Square gave me a full sense of the human decency of the man: for Kolakowski, who speaks fluent Russian, had a word of sympathy and encouragement for every one of those poor souls who tried to engage us in conversation.

I mention all of this, strangely enough, as an invitation to an antidote — an antidote to the brain numbness that descends on any thoughtful person at this point in an election cycle. The antidote is Leszek Kolakowski’s new book, Why Is There Something Rather Than Nothing? 23 Questions from Great Philosophers (Basic Books). Tired of mindless sound-bites? Disgusted with political demagoguery? Spend a few hours with Kolakowski, as he explains in plain language how some of the world’s greatest minds wrestled with the Really Big Questions: How can we know anything? What is justice? Why is there evil in the world? What is the source of truth? Is it possible for God not to exist?

On that same visit to Moscow, a friend and I toured the three cathedrals inside the Kremlin; all of them had recently been restored to mark the millennium of Christianity among the eastern Slavs. Our guide was a young man who wanted to practice his English and who’d been hanging around our hotel. He was good company, but a bit baffled when we got to a large restored fresco depicting the Last Supper. “Who are those men and what are they doing?” our guide asked, in complete innocence.

Here was Soviet Man: culturally and spiritually lobotomized, unable to comprehend a great artifact of his own civilization any more than he could comprehend Afghanistan’s Bamyan Buddhas. Leszek Kolakowski, I thought, should be here. A philosopher who had, at great personal cost, broken with Marxism in his native Poland could explain to this youngster the bad ideas — the bad answers to the Really Big Questions — that had deprived him of his cultural heritage. I hope something like that has happened to my young friend since our brief meeting.

In any event, if you’re looking for an antidote to campaign pablum, have a go at Why Is There Something Rather Than Nothing? Then give it to a young friend. Or a presidential candidate. Or Chris Matthews. 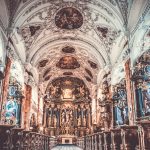