University of Notre Dame communications and public-information officials have let both National Review and my office know that they are unhappy with my January 3 NRO article, “Notre Dame Punts,” claiming that it was based on a “false premise.”

It was not. But before I address that charge, let me offer the Notre Dame football team and its legions of fans my congratulations on a successful and, in many instances, inspiring season: a fact that the outcome of the BCS championship game, however painful for ND supporters, doesn’t change one whit. I look forward with pleasure to conveying those congratulations in person when I lecture at the university later this year. There are good things happening at Notre Dame, and a lot of them have to do with the university’s impressive students, many of whom insist, sometimes against local opposition, that Notre Dame live as the icon of Catholic culture and Catholic higher learning it has long promoted itself as being.

Now, to the matter of alleged false premises.

The complaint from Notre Dame officialdom is that certain ESPN advertising policies would have made it impossible for the university to run, during the BCS championship game, the kind of pro-religious freedom or pro-life self-presentation ad I suggested. Therefore, Notre Dame contends, my criticism of the university was unwarranted and unjust.

As I indicated in my article, I was quite aware of the ESPN policy against “political advocacy or issue-oriented advertising.” That policy has, over the years, frustrated more than one group. In this instance, the policy presented insuperable problems for Catholic groups who explored the possibility of purchasing advertising time on the BCS championship-game broadcast to lift up the Catholic Church’s current defense of religious freedom for all.

But there is paid advertising, to which ESPN’s political censorship clearly applies, and then there is the 30-second free ad ESPN gives the universities that are competing in the BCS championship game, so that the schools can present themselves as they wish themselves to be perceived. Now no one, including me, was suggesting that Notre Dame, in making use of that free opportunity, should run a pro-life ad that began, “Justice Harry Blackmun’s majority opinion in Roe v. Wade was idiotic” and that concluded with the self-affirmation, “We’re Notre Dame, and we defend the right to life of all.” Nor was I suggesting, in reference to the other issue under discussion, that Notre Dame’s self-presentation ad run something like this: “HHS Secretary Kathleen Sebelius’s ‘contraceptive mandate’ is a blatant violation of the First Amendment and the Religious Freedom Restoration Act. We’re proud that Notre Dame is a litigant challenging this unjust regulation in court. We’re Notre Dame, and we defend religious freedom for all.”

What Notre Dame might have done, with the creativity (and tenaciousness) that have long attended the university’s communications and public-relations efforts, would have been to show the variety of religious traditions and practices at Notre Dame, allude to the university’s many theological, philosophical, and legal contributions to the Catholic Church’s defense of religious freedom, and then end the ad, as I suggested, with something like “We’re Notre Dame: And we defend religious freedom for everyone, at home and abroad.” A similar creativity and determination might have helped craft an ad highlighting the service that Notre Dame students provide to women in crisis pregnancies.

Perhaps the censors at ESPN would have objected even to this kind of self-presentation by the university. Would it then have been beyond the capabilities of Notre Dame’s public-relations apparatus — which had pulled out all the stops to defend the university’s 2009 award of an honorary doctorate of law degree to an unaccomplished president of the United States who had opposed any legal restraint on abortion, including partial-birth abortion, during his tenure in the Illinois Senate and the United States Senate — to challenge ESPN, publicly, asking why the statement that “we’re pro-life” or “we’re for religious freedom” (two affirmations at the core of Notre Dame’s identity as a Catholic institution of higher learning) constituted “political advocacy or issue-oriented advertising”? Since when is defending the First Amendment, or agreeing with Mr. Jefferson on the inalienable right to life, a matter of untoward (presumably because partisan) “political advertising”?

Notre Dame might have lost that argument, ESPN being what it is. But the university would have done a real public service by fighting the good fight and publicly challenging those who imagine that the defense and promotion of core American values are “partisan.”

Yet all of this is, in fact, rather moot. For, as I wrote on January 3, Notre Dame decided to punt. The evidence? In response to the extended urging of senior Catholic officials that Notre Dame use the unprecedented opportunity presented by the BCS broadcast to lift up religious freedom or the cause of life in the university’s self-presentation, a senior university official did not cite the ESPN ban on advocacy advertising at all. Rather, two other alleged problems were mentioned: First, might a defense of religious freedom, however creatively and subtly done, be thought an exploitation of the occasion? And second, wouldn’t saying that Notre Dame “fights for religious freedom” imply that the university was fighting someone or something (subtext: such as President Obama and his administration)? The ESPN ban on “political advocacy or issue-oriented advertising” was not raised by the university in those discussions. Why not? Is it unreasonable to suggest that it wasn’t mentioned because the will to make a pro-religious freedom or pro-life statement — and to fight this out with ESPN if necessary — wasn’t there? That a punt, so to speak, had already been called?

There’s one more twist to this story that bears reflection, as Notre Dame and other Catholic institutions consider their responsibilities in what is likely to be the increasingly hostile political and cultural climate fostered by the Obama administration’s efforts to bend civil-society institutions to the government’s will.

In 1967, legendary Notre Dame president Father Theodore Hesburgh, C.S.C., was one of the key figures in the “Land O’ Lakes Statement” by Catholic college and university leaders, a watershed in the evolution (or, as some would say, auto-deconstruction) of Catholic higher learning in the United States. The second sentence of the Land O’ Lakes statement reads as follows: “To perform its teaching and research functions effectively the Catholic university must have a true autonomy and academic freedom in the face of authority of whatever kind, lay or clerical, external to the academic community itself.”

Notre Dame, and many other Catholic colleges and universities, have used that statement to justify a certain “autonomy” from the teaching authority of the Catholic Church, whether that authority be represented by the Vatican or by local bishops. Does such a bold defense of the university’s autonomy apply to the “authority . . . external to the academic community itself” that is ESPN, in the matter of Notre Dame’s self-presentation on national television broadcasts? That seems not to have been the case, this time.

Friends of Notre Dame can hope that things will be different in the future, when the university has other golden opportunities to be the leader its admirers want it to be in the matter of Catholic witness under challenging cultural and political circumstances.

This article was originally published on National Review Online
http://www.nationalreview.com/articles/337181/dear-notre-dame-george-weigel

PrevNotre Dame Punts
The Marriage Debate I: Confusions about "Equality" and "Discrimination"Next 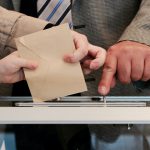