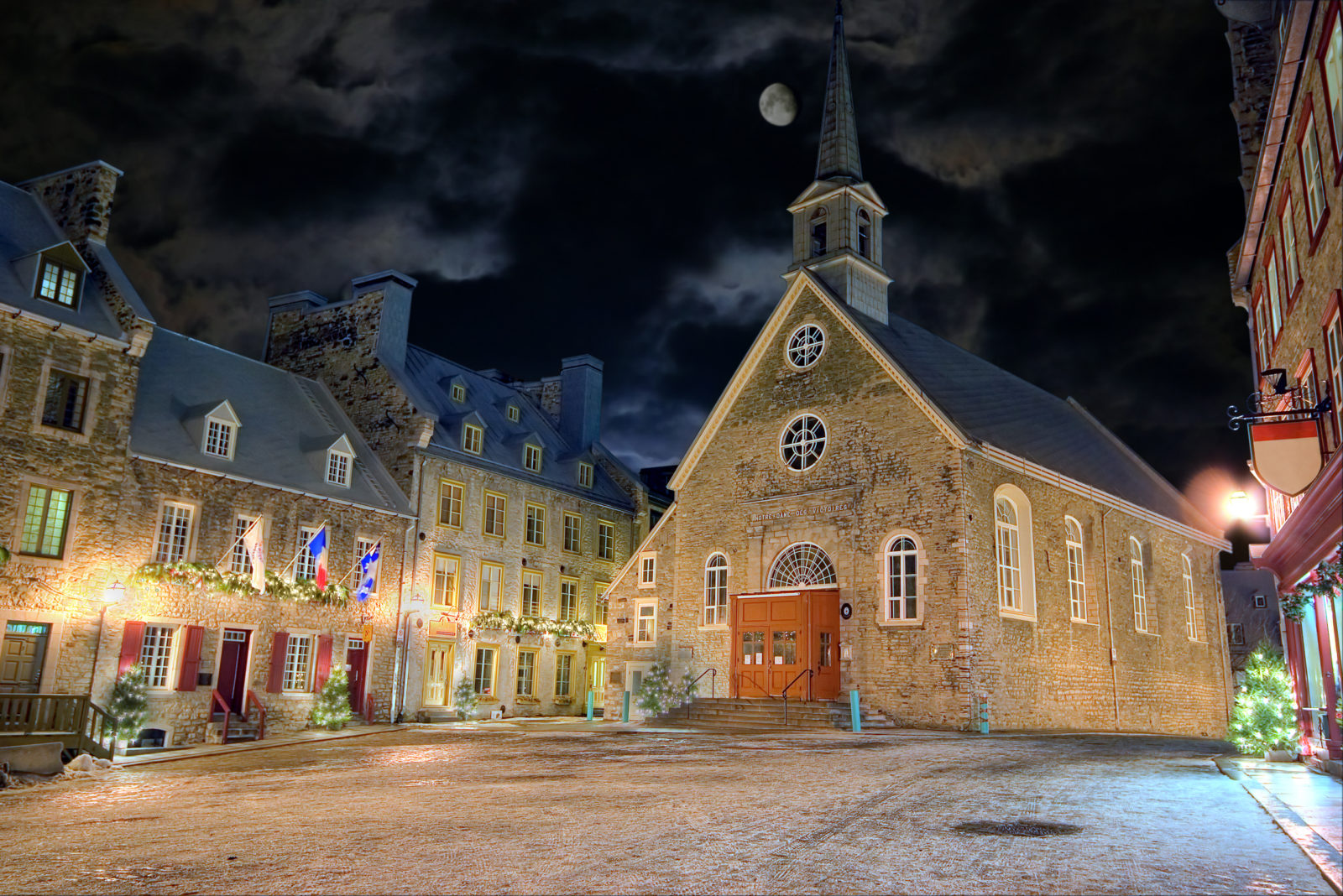 The same pattern prevails here in Québec City, both the old town and the new: The index on my map lists 186 street names from “Saint-Adélard” to “Saint-Yves” and continues with another thirty-four from “Ste.-Angèle” to “Ste.-Ursule.” Those names evoke memories of a unique culture charmingly captured in Willa Cather’s Shadows on the Rock, and a history of Catholic devotion unparalleled north of the Rio Grande.

Québec City is also home to the relics of two of Catholicism’s newest saints, both canonized by Pope Francis in 2014: St. Marie de l’Incarnation (1599-1672), a mystically gifted Ursuline nun who helped found New France’s first schools for girls and native peoples; and St. François de Montmorency-Laval (1623-1708), the first residential Catholic bishop in North America. It was after praying at Laval’s tomb, however, that I noticed a memorial plaque more revelatory of the current state of Catholicism in Québec than the province’s notable register of saints.

The plaque had been placed in the cathedral in 2008, during the civic celebration of the four hundredth anniversary of the founding of New France, and it read like this (my translation): “The Society for the 400th Anniversary of Québec, through its president, Mr. Jean Leclerc, pays homage to bishops, priests, and religious communities of men and women for their exceptional contributions to the history and the culture of the people of Québec.” A generous sentiment, to be sure. But what about the contributions of those bishops, priests, brothers, and sisters to the beatitude and salvation of les Quebecois?

Québec, a flourishing Catholic region for centuries, is now Catholicism’s empty quarter in the Western Hemisphere. There is no more religiously arid place between the North Pole and Tierra del Fuego; there may be no more religiously arid place on the planet. And it all happened in the blink of an eye. In 1937, a half-million Quebecois poured into the streets of Montréal for the funeral procession of “Brother André” of the Congregation of the Holy Cross, a passionate devotee of St. Joseph and worker of miraculous cures who would be canonized by Pope Benedict XVI as St. André Bessette. Eighty years later, no such demonstration of piety in La Belle Province could be imagined—except ifLes Habitants, otherwise known as the Canadiens, won the Stanley Cup, and that would involve a rather different sort of piety.

It’s often struck me that there are intriguing parallels among four intensely Catholic nations that went all-in secular during the late-twentieth century: Québec, Spain, Portugal, and Ireland. The differences are obvious, but look at the similarities. In each case the Church, and especially its clergy, was deeply entangled with politics and state power. In each case authoritarian government long prevailed, in marked contrast to other parts of the West. In each case, the inevitable confrontation between Catholicism and modernity was deferred as long as possible—not least through that Church-state entanglement. And in each case, when the tidal wave of modernity hit, it swept all before it within a generation.

When my summer neighbors here in Québec were growing up, their parents sought the intercession of “Brother André” for their sick. Today, three members of my summer parish were each asked, on being given a diagnosis of cancer, whether they wished to be euthanized—and that was the first question put to them. Le quart vide de catholicisme in North America is about to become this continent’s premier state-sponsored killing ground of the inconveniently ill and elderly; and it seems likely that the severely disabled won’t be far behind. Yet Québec’s Catholic leadership is virtually invisible in public life, and there is little indication that the New Evangelization has gotten any significant traction here.

Québec, once home to legions of confessors of the faith, badly needs such men and women again. They will only emerge from a faith as intense as that which once drove François Laval and Marie de l’Incarnation from the comforts of Europe to a then-bleak rock overlooking the St. Lawrence River.

PrevHe’s Not “Turning His Back to the People”
They’re Confessors, Not “Culture-Warriors”Next

Praying for Those to Be Elected