Catholicism and Islam: A Strategic Dialogue

This past June 1, the president of Pakistan, Pervez Musharraf, took to the op-ed page of the Washington Post to make a “plea for enlightened moderation” to his Islamic brethren around the world. Deploring “the devastating power of plastic explosives…[and] high-tech remote-controlled devices” and “the proliferation of suicide bombers,” General Musharraf went on to concede that “the unfortunate reality is that both the perpetrators of these crimes and most of the people who suffer from them are Muslims.”

That very same day, the Rome-based ZENIT news service, reporting on an interreligious conference in Qatar, noted that the head of the committee for dialogue with monotheistic religion’s at Cairo’s Al-Azhar university, Sheikh Fawzy Fadel Al-Zafzaf, had told the conference that “Islam is a religion of peace that respects human life.”

Is President Musharraf right and Sheikh Al-Zafzaf wrong? Or is the Pakistani general wrong and the scholar from Al-Azhar right? Perhaps the answer is that both are right, at least to some degree.

To Musharraf’s credit, he squarely faced the hard fact of the matter: the overwhelming majority of terrorist mayhem in the world in committed by Muslims, who all too often cite religious motivations and religious legitimation for their deeds. Sheikh Al-Zafzaf is right to remind his Catholic listeners that the murder of innocents is not commanded by the Qu’ran. But what is to be done about those Muslims who insist that their terrorism is divinely warranted?

Public authorities have one set of responsibilities in the face of Islamist terrorism. What about religious leaders? Can interreligious dialogue contribute anything to the struggle against terrorism?

I think it can, if the dialogue is conceived strategically. If interreligious dialogue decays into merely another form of political correctness, Catholics will be of little assistance to those Muslims who want to challenge the Islamist radicals. “Enlightened moderation” in the Islamic world, of the sort President Musharraf envisions, will not be advanced if Catholics, fearful of giving offense, give their Muslim interlocutors a pass on the tough questions. Our Muslim dialogue partners must know that, just as they would expect us to condemn Christians who claim divine sanction for terrorism, we expect them to condemn Islamist radicalism on explicitly Islamic grounds.

By the same token, Catholics should try to help Islamic religious leaders, scholars, and lawyers develop an Islamic case for the acceptance of pluralism, for a commitment to the method of persuasion in politics, and for the other basic elements of what we call “civil society.” The great question for Islam as a culture-forming religion – a question whose resolution will shape a lot of 21st century history – is whether Muslims can develop a genuinely Islamic case for civility amidst diversity in society by drawing on their own sacred texts and legal codes. It is arrogant to expect a billion Muslims to become good secular western liberals; it’s also foolish, because they’re not going to do it. The question is not whether the West can help facilitate a version of Father Neuhaus’s “naked public square” in the Islamic world. The question is whether Islam, within its own scriptures and history, has the resources to support those Muslims who want to build modern societies around the conviction that it’s God’s will that we be tolerant of those who have different understandings of God’s will.

What do Catholics bring to that discussion? We bring some recent history. It took the Catholic Church until 1965, in the Second Vatican Council’s Declaration on Religious Freedom, to articulate a Catholic theory of pluralism and tolerance. More than one hundred fifty years of robust (and often fractious) argument preceded the Declaration. Surely Catholics learned something from that experience. Perhaps that something could be of use to our Muslim interlocutors as they try to forge a development of social doctrine, as it were, in their own religious tradition.

That’s the strategic purpose that should shape Catholic-Islamic dialogue in the twenty-first century: to help Muslims develop an Islamic case for the civil, tolerant society. “Jaw, jaw is better than war, war,” Churchill famously said. But the “jaw, jaw” must be purposeful, if it’s to help prevent “war, war.” That’s why it’s time to start thinking of interreligious dialogue in frankly strategic terms. 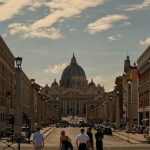