CAMPAIGN 2008: Iraq and the War Against Jihadism

No matter who is elected president, American forces will remain in Iraq for a considerable period of time. The serious points at issue have to do with troop numbers, deployments, missions, and the question of a permanent American base in Iraq; “End It Now” and similar bumper-sticker admonitions ill fit the real world of moral and political responsibility. America’s Mesopotamian expedition has been very costly in lives, treasure, and political good will. Domestically, however, the adult questions have to do with what we’ve learned about the exercise of American power in a world in which the art of statecraft remains a subtle and complex one.

So whether it’s President McCain or President Obama, the next commander-in-chief will have to see the war in Iraq through to a successful conclusion. The possibility of just that — a  stable Iraq, safe for pluralism, governed responsively and responsibly– has been enhanced by the counterinsurgency strategy implemented by General David Petraeus over the past eighteen months. Unlike other major American institutions — the Congress, for example — the U.S. military has an impressive capacity to learn from its mistakes, and from the mistakes of the nation’s political leadership. That, in itself, is a positive lesson to be drawn from the past five difficult years.

But it’s not enough. The country remains divided on the nature of the threat that could no longer be ignored after 9/11. A common understanding of what we are fighting, and why, is essential in building and sustaining a bipartisan consensus that will allow presidents of both parties to conduct the war against global jihadism over the next several decades — and to do so through all the instruments of statecraft, of which armed force is only one. That struggle is, among many other things, a struggle in defense of religious freedom — a core Catholic concern in this or any other election year.

So here are some questions that Catholic voters might pose to the two principal presidential candidates:

1) How do you define the enemy in this new kind of war? What role does distorted religious conviction play in creating the dangers we face from terrorists?

2) Whatever you may have thought in 2003, how do you think Iraq “fits” within the global struggle against jihadism today? Do you think it possible that Iraq might become a kind of Middle Eastern Poland — the domino that sets in motion a long-term regional trend toward responsible and responsive government?

3) What can the United States do to ensure that those Christian Iraqis who have fled Iraq in recent years have the opportunity to return to a home that is safe for them? What should the U.S. be doing now to protect the remnants of Iraq’s once-vibrant Christian communities?

4) What specific steps will you take to enhance American intelligence capabilities, which have consistently failed us over the past decade? What training programs in the languages and cultures of the Islamic world will you implement in order to upgrade the capacities of both the CIA and the Department of State?

5) If the war against jihadism is, at bottom, a contest between two very different ideas of the just society, what will you do to enhance our national capacity to make the case for civility, tolerance, and religious freedom through our public diplomacy? Is broadcasting American pop culture into the Middle East the most effective way to illustrate our convictions about the good society? What should we be telling an Arab Islamic world, caught in a narrative of failure of its own making, about the goods that freedom brings? Or should we just drop the subject?

6) How will you guide the evolution of an American military that has become confident in its counter-insurgency capabilities and that now has a cadre of brilliant younger officers formed in the hard school of learning-from-our-mistakes in Iraq?

7) In the cases of Iran and North Korea, and indeed as a general principle, do you favor coupling U.S. anti-nuclear proliferation diplomacy to an American  pledge to work for the abolition of nuclear weapons?

8) What did you get wrong about Iraq? 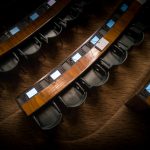