Several years ago, I asked my friend, Cardinal Christoph Schoenborn of Vienna, what he thought about the delays in the beatification process for Franz Jaegerstaetter, the Austrian peasant beheaded for refusing to serve under arms in Hitler’s Wehrmacht.

Cardinal Schoenborn is a theologian of no small accomplishment; he’s also a man of deep piety, which his answer to my query reflected: “I’m already praying to him.” A little relieved, I confessed that I, too, had jumped the canonical gun and had been praying to a man whom, like the cardinal, I regarded as a martyr — indeed, as one of the singular figures of 20th century Catholicism.

So it was a great satisfaction this past October 26 when the official Church caught up with us, so to speak, and Franz Jaegerstaetter was beatified in Linz, Austria.

Very few people would have imagined the young Franz as a saint. He was a hellion, and it was only after his marriage to Franziska Schwaninger and a honeymoon pilgrimage to Rome that this largely uneducated peasant-worker was transformed by grace into a serious Catholic.

A very serious Catholic. Jaegerstaetter was a daily communicant in an era when that was far more unusual than today; he became a Third Order Franciscan; he read closely in the Scriptures and the lives of the saints; he fasted, did acts of penance, gave generously to the poor, and served as volunteer sacristan of his local parish.

When Hitler’s Anschluss led to Austria’s incorporation into the Third Reich, Jaegerstaetter, alone in his village, protested. Too many Austrian Catholics welcomed the new order with enthusiasm, voting in large numbers for incorporation into Nazi Germany; Jaegerstaetter (according to that distinguished amateur historian, William Doino Jr.) wrote that “what took place in the spring of 1938 was not much different from what happened that Holy Thursday 1,900 years ago when the crowd was given a free choice between the innocent Savior and the criminal Barabbas.”

Franz Jaegerstaetter’s own trial came soon enough. Called to military service in 1943, he refused induction, not on pacifist grounds (he wasn’t a pacifist), but on the basis of what we would now call selective conscientious objection. Hitler’s war was an unjust war being waged by a fatally wicked regime; therefore, conscience would not permit serving as a soldier in the Wehrmacht.

Jaegerstatter’s pastor and bishop tried to talk him out of his objections; his responsibilities to his wife and family weighed heavily on him; his offer to serve as a military paramedic was refused by the Nazi regime.

In a prison cell in Berlin, Jaegerstaetter suffered intensely at the thought that he might be acting irresponsibly toward his family. But as he wrote his wife on the day of his execution:

“It was not possible for me to spare you the pain that you must now suffer on my account. How hard it must have been for our dear Savior when, through his sufferings and death, He had to prepare such a great sorrow for His Mother — and they bore all this out of love for us sinners. I thank our dear Jesus, too, that I am privileged to suffer and even die for Him…May God accept my life in atonement not only for my sins but for the sins of others as well.”

Franz Jaegerstaetter was executed by guillotine on August 9, 1943 — one year to the day after Edith Stein, now St. Teresa Benedicta of the Cross, died in the gas chambers of Auschwitz/Birkenau. The brilliant Carmelite philosopher and the simple Austrian peasant shared an unshakeable faith that, as Blessed Franz put it, “Neither prison nor chains nor sentence of death can separate [us] from the love of God…[for] the power of God cannot be overcome.”

Given the life-and-death choice between what Dietrich Bonhoeffer (the Lutheran martyr executed by the Nazis in 1945) called “cheap grace” and “costly grace,” Edith Stein and Franz Jaegerstaetter embraced the costly grace of the cross — and now share the glory of the Resurrection.

May their intercession at the throne of grace be a powerful aid in the new evangelization of the German-speaking world. 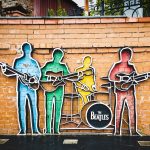