One of the disappointments of the post-Vatican II period has been the glacial pace of the growth in Catholic biblical literacy the Council hoped to inspire. Why the slow-down? Several reasons suggest themselves.

The hegemony of the historical-critical method of biblical study has taught two generations of Catholics that the Bible is too complicated for ordinary people to understand: so why read what only savants can grasp? Inept preaching, dissecting the biblical text with historical-critical scalpels or reducing Scripture to a psychology manual, has also been a turn-off to Bible-study. Then there is the clunkiness of the New American Bible, the pedestrian translation to which U.S. Catholics are subjected in the liturgy: there is little beauty here, and the beauty of God’s Word ought to be one of its most attractive attributes.

But it was not until I read “Our Babel of Bibles” by Baylor University’s David Lyle Jeffrey, published in the March/April 2012 issue of Touchstone, that I began to understand that the proliferation of modern biblical translations and editions is also part of the problem. Not only are there a plethora of different translations from which to choose; as Dr. Jeffrey points out, there are now “niche” Bibles:

“If you are tired of your mother’s old Bible, which printed the words of Jesus in red, you can choose a more trendy Green Bible, with all the eco-sensitive passages printed in green ink. If you are a feisty woman unfazed by possibly misdirected allusions, then maybe you would like the Woman Thou Art Loosed edition of the NKJB [New King James Bible]. If you should be a high-end of the TV-channel charismatic, there are ‘prophecy Bibles’ coded in several colors to justify your eschatology of choice.”

And that’s before we get to the super-trendy editions like the Common English Bible, which renders Psalm 122.1 (“I was glad when they said unto me/Let us go to the Lord’s house”) as “Let’s go to the Lord’s house.” This is not just dumb; as Dr. Jeffrey points out, is also “verges on a grotesque secularism at the level of ‘Let’s go to Joe’s place — he has the biggest TV.'” And lest you think Jeffrey exaggerates, please note that the CEB renders “Son of Man” as “the Human One.” Yuck.

All of which is an answer to those who fretted that Anglophone Catholics couldn’t handle “consubstantial” in the new translations of the Roman Missal. As Dr. Jeffrey writes, “What would have happened if someone had said, in that time and place, ‘We just have to find dynamic equivalents in Anglo-Saxon?’ There weren’t any. Appropriately, the first translators were not intimidated by the prospect of teaching people the meaning of biblical and sacral terms not to be found anywhere in their ordinary language. They gratefully borrowed the language of Scripture as they found it in another tongue.”

What to do today? My suggestion is to get yourself the Ignatius Press edition of the Revised Standard Version, and read it over and over again until its language works its way into the crevices of your mind and the texture of your prayer. Maybe, some day, we can hear that translation at Mass.

PrevPugin at 200
Defending Religious Freedom in Full: A Generation’s ChallengeNext 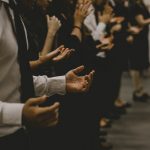