The first fifteen minutes of Saving Private Ryan and the jump sequence in the second episode of Band of Brothers are vivid reminders of the extraordinary courage displayed on D-Day, seventy years ago. When I was a boy, Hollywood taught America about June 6, 1944 in The Longest Day: a fine movie, but rather antiseptic in its portrayal of World War II combat. The stark realism of the more recent films brings home, in a gut-wrenching way, the test of moral fiber involved when a man is asked to jump out of a C-47 into a flak-filled night sky, or to run down the ramp of a Higgins boat onto the killing fields of Omaha Beach.

The courage of U.S. Army Chief of Staff George C. Marshall, for example: Marshall insisted for two years that the only way to defeat Hitler and his war machine was to land a large force in France, beat the German army, and wrest control of the continent of Europe from the Nazi regime—a point Marshall had to carry against the virtually unanimous opposition of his British counterparts, who, like Winston Churchill, preferred a “periphery” strategy that would peck away at the Third Reich before a quick, end-game invasion administered the coup de grace to a collapsing German empire.

Or the courage of SHAEF commander Dwight D. Eisenhower: Was there ever a decider more alone, and with more weight on his four-starred shoulders, than Ike, making the right call on June 4th (to defer the invasion for a day because of weather) and then getting it right again on June 5th (setting the invasion for June 6th, after the meteorologists told him there was a brief window of opportunity)? And as if that weren’t enough, Ike bore that weight of decision shortly after being urged by the Allied air forces commander, Sir Trafford Leigh-Mallory, to cancel the airborne drops behind the invasion beaches—another temptation to inaction that Eisenhower successfully (and wisely) resisted.

The valor of the Rangers of Pointe du Hoc and the Screaming Eagles of the 101st Airborne and the sailors who risked grounding their destroyers on the Normandy beaches to provide covering fire for the hard-pressed men on Omaha’s Dog Red and Fox Green, like the decisiveness of their leaders, stands in sharp and disconcerting contrast to the fecklessness displayed by too many European and American leaders in recent months, during which foreign-policy-by-hashtag seems to have become the norm.

Was Vladimr Putin deterred from his efforts to ingest Ukraine by the U.S. Department of State’s Twitter campaign, launched by spokeswoman Jen Psaki holding up a “#WeStandWithUkraine” sign that looked as if it had been made in a kindergarten class? Were the Islamist terrorists and kidnappers of Boko Haram in Nigeria impressed, or frightened, or persuaded to change their evil ways by British Prime Minister David Cameron holding up a “#BringBackOurGirls” sign on a TV chat show?

Such unseriousness in public life is often an expression of moral unseriousness. Dean Acheson once wrote with admiration of his mentor, the prominent Washington attorney J. Harry Covington, who never said, “I have to do it,” but rather “I have it to do.” “I have to do it” suggests someone sniveling under duress, who is being compelled to do something they’d really rather not do were the world not so beastly. “I have it to do” is the mark of a morally serious leader who does not take counsel from focus groups as to the policy course of choice, but who accepts the burden of leadership as an obligation of honor, as Marshall and Eisenhower did.

On this 70th anniversary of the longest day, it would be well to reflect on what Europe, and the rest of the world, would look like in 2014 if Churchill’s and FDR’s response to Hitler had been “#BeatAdolf.”

A Moral Horizon for U.S. Foreign Policy in the 21st Century 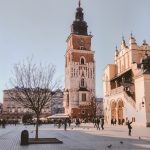