I’ve yet to see anyone reading with a “Kindle” or an I-Pod at the beach, so there may be hope for civilization yet. Summer is meant for real reading. Happily, there’s no lack of informative and amusing new stuff this year.

In a tempestuous political season, let’s start with two books on presidential politics.

You think it’s nasty now? Or that both parties are dug into partisan bunkers from which they lob ideological grenades? Or that the “politics of personal destruction” is rampant? You think it’s never been more contentious? Try Edward J. Lawson’s A Magnificent Catastrophe: The Tumultuous Election of 1800, America’s First Presidential Campaign – and then think again.

The Founders and Framers imagined that choosing our non-hereditary king would involve the nation’s eminent men reaching consensus on a fitting candidate, whose election would then be registered through the Electoral College. This worked well enough given the obvious choice, George Washington, in 1788 and 1792. With the emergence of political parties, however, ongoing political combat – and real policy differences – between the Federalists of Washington, John Adams, and Alexander Hamilton, and the Republicans (later Democrats) of Thomas Jefferson, James Madison, and James Monroe, put an end to the consensus approach to president-making.

Adams’ election in 1796 was a relatively tame affair. But bitter disputes over foreign policy, homeland security, and economic development divided old revolutionary comrades during Adams’ term. Those deep (and eerily familiar) disagreements, plus the ambitions of Jefferson and Aaron Burr, created the “magnificent catastrophe” that was the election of 1800. Thought to be a contest between Adams and Jefferson, our first presidential donnybrook in fact ended in an Electoral College tie between Jefferson and Burr – Jefferson’s running-mate! Much horse-trading followed, before the House of Representatives settled things in favor of the master of Monticello (who was perfectly capable of playing hardball when required). The repercussions, over time, were dramatic: Hamilton’s death in a duel with Burr, and Burr’s treasonous scheme to conquer Mexico, wed it to the American West, and declare himself emperor of a new North American sovereignty.

Then we have Alvin Felzenberg’s imaginative and entertaining new study, The Leaders We Deserved (and a Few We Didn’t): Rethinking the Presidential Ratings Game. Felzenberg jettisons the hoary single-grade rating system invented by the Arthur Schlesingers, senior and junior, in favor of three measures of presidential personality (character, competence, and vision) and three criteria of presidential accomplishment (economics, protection of civil liberties and human rights, defense and foreign policy). The results? An instructive re-reading of American history, and a few surprises.

The much maligned U.S. Grant, for example, gets high marks for defending black freedmen against intense political and social pressure. Andrew Jackson looks far more the genocidal maniac than “Old Hickory;” what’s he doing on the twenty-dollar bill? Woodrow Wilson shrinks in stature and Ronald Reagan rises – two judgments likely to cause heartburn among academic historians. The Leaders We Deserve is a great read; it will stoke many a fascinating argument.

Finally, there is The Faithful Departed: The Collapse of Boston’s Catholic Culture, by Philip Lawler: editor of Catholic World News, Red Sox zealot, and maker of legendary mint juleps on Derby Day. I can’t agree with Phil’s assessment of Fr. Leonard Feeney’s draconian interpretation of the ancient theological maxim, “No salvation outside the Church.” And I wish Lawler had dug deeper historically, to see if the default positions in Boston’s culture of clerical corruption go back to the glory days of William Cardinal O’Connell in the 1930s and 1940s.

Those caveats notwithstanding, Lawler’s account of the unholy trinity that brought Boston Catholicism to its present, unhappy state – clerical sexual misbehavior, episcopal irresponsibility, and homosexuality – is right on the mark, and explains a lot beyond the Hub. The tale is told in sorrow rather than anger; the lessons drawn are the proper ones. Many Catholics understandably want to put the Long Lent of 2002 behind us. No one should do so without reading The Faithful Departed.

And for fun? Try Joseph Epstein, Narcissus Leaves the Pool (Mariner Books), and spend some rewarding time with America’s leading practitioner of the familiar essay. 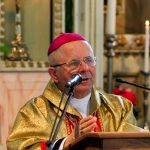