There’s been a lot of chatter since 9/11 about Islam’s need for a Martin Luther, a Muslim reformer who would accelerate this great world religion’s acceptance of two key planks in the platform of political modernity: that religious freedom is a basic human right, and that democracy is the form of government most likely to produce a just society. To be candid, this Lutheran imagery has never made much sense to me. It misses large parts of the relationship between the Reformation and the freedom project in the West, and it seems a very dubious scenario for theological development within Islam.

In the mid-1990s, in an essay entitled “Waiting for Augustine,” I suggested that resolving the painful encounter between Islam and modernity required a figure of immense intellectual and spiritual authority who could distinguish for Muslims between the earthly city and the City of God, as Augustine had done for Christians in his 5th century masterwork. Now, I must confess, that Augustianian analogy also seems not-quite-right. For as a Muslim colleague, Stephen Schwartz of the Center for Islamic Pluralism, recently suggested to me, what Islam really needs is a Leo XIII: a religious leader who, by retrieving and developing forgotten elements of an ancient faith, can bring that faith into a fruitful engagement with the modern world.

When Leo XIII came to the papacy in 1878, the Catholic Church’s official thinking on Church-and-state was frozen in intellectual amber — not least because the Italian destruction of the Papal States had made Leo’s predecessor, Pius IX, the “prisoner of the Vatican.” Gioacchino Vincenzo Pecci, who would succeed Pius in that gilded and frescoed “prison,” had enjoyed a broad pre-papal career in diplomacy, civil governance, and pastoral care; he was also a leader in the revival of the philosophy of St. Thomas Aquinas. Thanks to those experiences and that intellectual perspective, Pecci suspected that what many Catholics regarded as “traditional” — the insistence that rightly-ordered states must legally and financially support Catholicism as their official religion — did not, in fact,  reflect the deepest currents of Catholic thought on the relationship between religious and political authority.

So when he became Leo XIII, Pecci began a careful, lengthy process of retrieval and development that, by drawing on the “perennial philosophy” of Aquinas and looking deeper into the Church’s tradition than the self-styled traditionalists were prepared to do, led (over some eighty years) to a positive Catholic engagement with the institutions of political modernity — one result of which was the Second Vatican Council’s Declaration on Religious Freedom, which in turn led to the Catholic Church’s emergence as the world’s premier human rights advocate.

Retrieval-and-development, rather than rupture-and-revolution: Is this a model that might be attractive to serious Muslims who want to do something positive to resolve the intra-Islamic civil war that has spilled out from the House of Islam and now affects all world politics — most lethally, through jihadist terorism? That’s one of the large questions I pose in Faith, Reason, and the War Against Jihadism, just published by Doubleday. In this small book, I make several other arguments:

Faith, Reason, and the War Against Jihadism also includes a host of policy proposals: a modest contribution to the national conversation in this hyper-political season. I hope you find it all of interest. 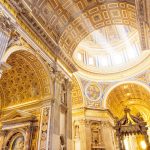 The New Normal Gets Down and Dirty . . . and Other Predictable Consequences of Obergefell