Although I have lived in the Washington, D.C., area since 1984, I am an orthodox Baltimorean by birth, nurture, education, baseball loyalties and a settled disdain for offering tartar sauce with crab cakes.

So I should be the last person to think the unthinkable about my native city’s principal contribution to American public culture (after, of course, the Colts’ sudden-death victory over the New York Giants in the 1958 NFL championship game).

Nonetheless, I shall risk the charges of heresy and treason by proposing the following thought experiment: As America celebrates Independence Day, let’s ponder a switch in national anthems, substituting “America the Beautiful” for the poem Francis Scott Key wrote during the British bombardment of Fort McHenry in Baltimore harbor during the War of 1812.

Older readers and Americana buffs will remember that “The Star-Spangled Banner” won the title of national anthem in a close Congressional vote, nipping “God Bless America” at the wire in 1931. Since then, the anthem — which ranges over an octave and a half and is thus unsingable by anyone beside children, virtuoso sopranos and castrati — has been vocally mangled by patriotic Americans from, er, sea to shining sea. The severe difficulty of singing “The Star-Spangled Banner” properly is the strongest argument in favor of replacing it.

(That the tune to which Key’s poem was set, “To Anachreon in Heaven,” was originally a London drinking song is not a disqualification for right-thinking Catholics, although it might vex some of the evangelical brethren.)

Veterans of the Baltimore Catholic schools of the 1950s once knew three stanzas of Key’s lyrics; I venture to guess that less than 1/10 of 1 percent of my fellow-countrymen know anything beyond the first stanza today — if even the full first stanza is widely known. It would be a shame if it weren’t, though. For the “Star-Spangled Banner”‘s best claim to canonization is that the stanza we all (try to) sing ends with a question, which is an appropriate way to end the national anthem of a democracy.

Why? Because democracy is always something of an experiment. “Oh say, does that star-spangled banner yet wave, o’er the land of the free and the home of the brave?” — the question poses itself today, just as it did under the rockets’ red glare in 1814, and just as it will pose itself in every future generation.

“America the Beautiful” would, arguably, be a better national anthem, not because it’s less bellicose — it isn’t, with its paean to “heroes proved in liberating strife, who more than self their country loved and mercy more than life” — but because it’s eminently more singable. Moreover, Katherine Lee Bates’s lyric acknowledge that the wonder of America is a gift of God’s grace, while reminding us that to be a nation “under God” means being a nation under judgment.

Thus the fine second stanza — the one you get to after extolling “purple mountain majesties” (please note: not “purple mountain’s majesty”) — teaches us the always useful lesson that faith, reason, freedom, and the rule of law go together in a national experiment that also has the character of a pilgrimage:

O beautiful for pilgrim feet
Whose stern impassioned stress
A thoroughfare for freedom beat
Across the wilderness!
America, America, God mend thine every flaw;
Confirm thy soul in self-control, thy liberty in law!

Bates’ unapologetic linking of the American democratic experiment with divine providence, divine guidance and divine judgment probably renders “America the Beautiful” unacceptable to today’s secularist thought-police and their allies in the federal courts. One can easily imagine the ACLU contesting “America the Beautiful”-as-national-anthem on the grounds that singing about God shedding his grace on the United States violates the First Amendment (just as one can imagine certain parties deploring the notion that God’s grace is “his” grace).

So swapping Keys for Bates is an idea whose time may not yet have come — and the shades of Baltimoreans past can rest easy. Still, both anthems, with their stress on sacrifice for the common good, give us something to think about, come the Glorious Fourth. 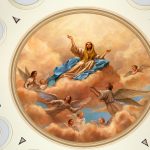