After Twenty Years: A Jesuit Self-Critique

Twenty years ago, John Paul II took the unprecedented step of appointing a “personal delegate” to govern the Society of Jesus. It was an attempt at papal shock therapy, aimed at getting the Church’s largest and most prestigious religious order of men to reflect critically on the path they had taken since the Second Vatican Council. Ever since the Jesuits’ normal governance was re-established in 1983, defenders and critics of the Pope’s intervention have both wondered just how successful the shock therapy had been.

Now comes evidence that the yeast of self-critical reflection is enlivening internal Jesuit discussions about the Society’s fidelity to its unique charism. In an address to the New England province of the Society on July 31, the feast of St. Ignatius Loyola, Father Robert Levens, the New England provincial, raised some sharp questions for his fellow-Jesuits’ consideration.

On the matter of a distinctively religious way of living: “In our present communities we are too isolated, too independent, and too often unavailable to support…each other appropriately….There is also too much loneliness and too much dysfunction present in the way many of us live. As a result, we have become unattractive to many of our own, let alone others who might be considering a Jesuit vocation.”

On the question of Jesuit spirituality: “I am also convinced that we are not the men of prayer that we are called to be. I know generalizations are often unfair, but too many of us do not pray daily, celebrate or attend Mass daily, [or] make an annual retreat…[I] exhort those who need it to a conversion and a re-appropriation of those religious practices that will sustain and nurture us in our vocations.”

And, above all, on the matter of the Society’s fidelity to the Church and the Pope: “One final area where we need to examine and properly correct [ourselves] is our attitudes with regard to the Church….We must remember that our charism is ecclesial and we have to be very secure in that identity. If we are, we will be quick to avoid any hint that we consider ourselves or our institutions to be a church parallel to the Church or a church within a Church….

“If we present ourselves as only critical and not faithful to the Church, that is, if we do not love the Church as it is, but only as we would have it, then we will not be attractive to those who seek the [faith]. When we speak publicly, are we seen as men who love the Church? Do we use our teaching to build up or tear down? Is our first response to anything from the Vatican or the local chancery one of suspicion, criticism, or distrust? There can be in us a prevalent cynicism that is the death of prayerfulness, individually and collectively. ‘Wonder’ sees reality with awe and openness – ready to believe the best of everything, including ecclesiastical authority. Have we lost that sense of wonder? At times, perhaps even our focus on Jesus Christ is lost. Are we preaching him?”

The Society’s apostolic renewal, Father Levens concluded, depended on its religious and spiritual renewal. “If we are not ready to pay the cost of interior conversion and reformation,” he said, “the rest of our efforts at renewal will not work.”

The provincial’s address ended with a surprising citation, taken from a 1926 letter from Father Wladimir Ledochowski, then the Jesuit General, on the province’s establishment: “It is my most heartfelt wish that this new province…make new and continued increase in numbers and in virtue and become a true mother of saints. The more generously God has bestowed excellent vocations on this region…all the more diligently should we strive that [the] young men whom God has given us be formed according to our holy laws and the ancient traditions of the society, and become workmen of distinction in the vineyard of the Lord.”

It’s a safe bet that no Jesuit provincial in the U.S. has appreciatively quoted Wladimir Ledochowski for rather a long time. That, and the unsparing honesty of Father Levens’ address, suggests that something interesting, and just possibly hopeful, is afoot. 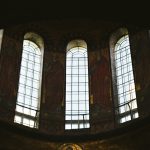 Impending Russian attack on the Cathedral of Holy Wisdom in Kyiv?