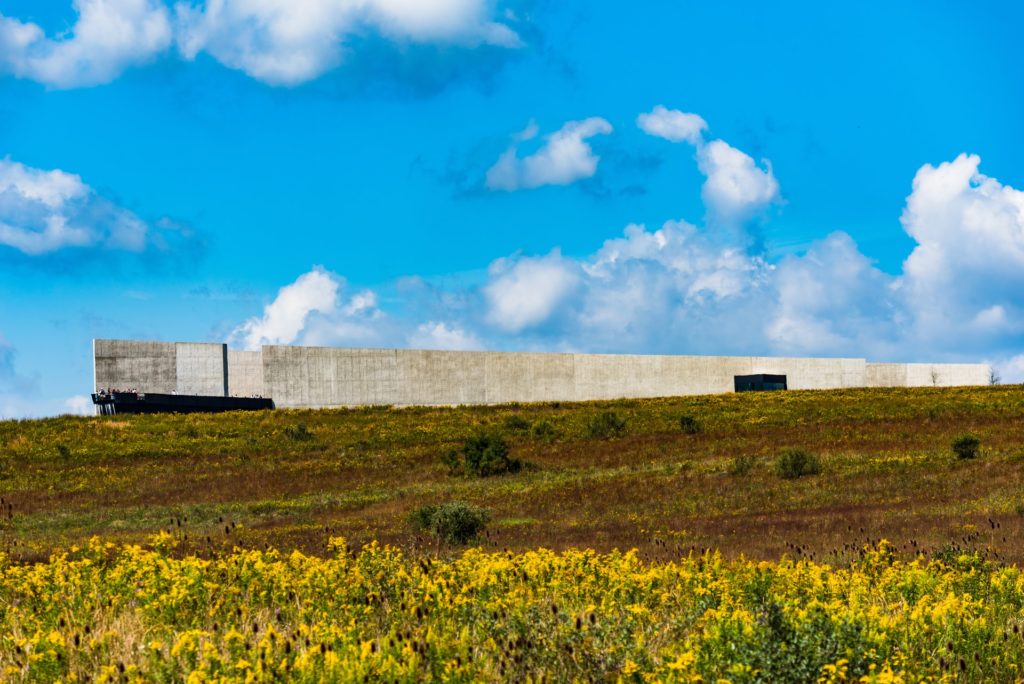 The most moving feature of the Flight 93 National Memorial in Shanksville, Pennsylvania, is the pictures of the forty brave men and women who lost their lives on September 11, 2001, while preventing al-Qaeda terrorists from destroying the U.S. Capitol. At this moment of intense divisiveness and polarization in America, it’s important to reflect on those images and learn from them, however peripheral they may be to the memorial’s design.

At 8:42 a.m. on 9/11, United 93, a Boeing 757, took off on a flight from Newark to San Francisco. The north tower of the World Trade Center was struck by a hijacked airliner four minutes later. At 9:03 a.m., the south tower was hit. Some twenty-five minutes after that, terrorists seized control of United 93. And a few minutes later, the Pentagon was struck by another hijacked plane. The next twenty minutes wrote an epic story of courage and resolve into the annals of American history.

Thanks to cell phones and on-board airphones, Flight 93’s passengers, who were herded to the back of the plane after the hijackers seized the cockpit, learned what had happened to the Twin Towers and the Pentagon. Thirty-seven phone calls, plus the fact that the plane had reversed its course and was heading east toward Washington, convinced the passengers that the hijacking of United 93 was part of a coordinated terrorist plot to cripple the United States. After discussing their situation and responsibilities, the passengers voted to try and retake the plane, tackling the hijacker who remained in the passenger cabin (and claimed to have a bomb), and then forcing their way into the cockpit to regain control of a sixty-five-ton jetliner careening through the sky.

Passenger Todd Beamer, a leader of the revolt, recited the Lord’s Prayer and Psalm 23 with airphone operator Lisa Jefferson on the ground, asking her to call his family and tell them how much he loved them “if I don’t make it.” Jefferson then heard Beamer say to the others, “Are you guys ready? Okay. Let’s roll!” Passengers charged the cockpit, battering their way past the hijacker with the alleged bomb. After a few minutes of struggle, the plane rolled onto its back and Flight 93 smashed into the Pennsylvania countryside at 563 mph, blasting out a crater eight to ten feet deep and thirty to fifty feet wide, and igniting a fireball that rose into the sky as a gigantic mushroom cloud. Everyone aboard was killed instantly by blunt-force trauma; the Capitol, where Congress was in session, was saved.

It took the passengers of Flight 93 less than twenty minutes to decide that they would rather risk death as free men and women than submit to certain destruction as submissive captives of evil men intent on mass murder. Whatever their differences of race, sex, or political opinion, there was a unity in their determination to prevent a fourth national catastrophe on September 11, 2001. In the fateful and intense minutes leading up to their vote to resist, I think it very unlikely that there was discussion of America as ill-founded, systemically racist, homophobic, or misogynist. The American tradition of free cooperative action for the common good, which so impressed Alexis de Tocqueville when he wrote Democracy in America 160 years earlier, was alive on United 93 between 9:30 and 10 a.m. on 9/11.

None of this, alas, is conveyed by the design of the Flight 93 National Memorial. Its Wall of Names commemorating the passengers and crew is a poor imitation of the Vietnam Veterans Memorial on the National Mall. The ugly, concrete “Tower of Voices” with its forty wind-driven chimes has no obvious connection to the passengers and crew it claims to commemorate. The Visitor Center looks like I. M. Pei’s East Building of the National Gallery of Art, sawn in half horizontally. The design does not intimate, symbolically, the transcendent truths and virtues embodied by the resistant passengers and crew of Flight 93: the classic idea of what a memorial should do.

With, perhaps, one exception. The white marble slab on which is carved the name of passenger Lauren Catuzzi Grandcolas includes, in smaller letters, “and unborn child.” That brief inscription has a unique power of suggestion in a memorial that otherwise fails to speak eloquently of the dignity of life, which was affirmed by the men and women of Flight 93 who chose not to flinch in the face of wickedness, thus giving choice its true nobility.

PrevPope Francis, “Estranged” Catholics, and Holy Communion
The Pope We All Need:
The Papacy and the Crisis of the WestNext

The Anatomy of a Pathology